Earl Sweatshirt on being away, the situation with his mother and more 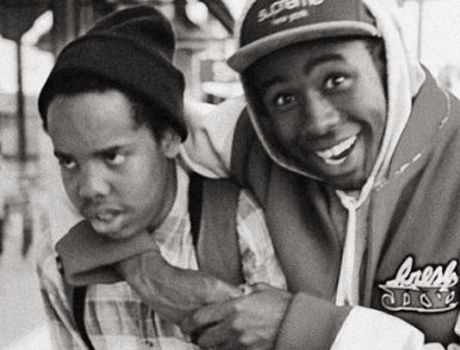 Update: Odd Future also have a new video out, called ‘Oldie’. We’ve embedded that underneath the Earl interview.

Odd Future’s Earl Sweatshirt has given his first recorded interview.

The youngest member of the crew, Earl self-released his debut album – considered by many Odd Future fans as the greatest album to emerge from the group yet – in March 2010, but after its release, it emerged that his mother wouldn’t let Odd Future release his music, and Earl was eventually sent to a school in Samoa. Even his guest appearance on MellowHype’s BlackenedWhite, initially released in 2010, wasn’t allowed on the album’s physical issue on Fat Possum the next year.

Anyway, as you likely already know, Earl is now back and part of the crew again, appearing at the end of Odd Future’s new mixtape. He also recently sat down with Hot 97’s Peter Rosenberg for his first recorded interview (not counting impromptu conversations with Tyler, the Creator on Odd Future’s YouTube channel), talking about what it was like to miss the maddest year of Odd Future’s life, and how he’s discovered that being famous isn’t actually that fun.

Earl, especially when compared to Tyler (who makes hissing noises into the mic while Earl’s speaking, walks out the interview only to come back two minutes later, and generally just acts like Tyler) comes across very well, and genuinely upset by the fact that he’s not able to indulge in the simple pleasures that he used to. As he puts it, “This shit isn’t fun all the time. For instance, the block that we came up on, like that we were there when no one was there, we get to like just be up there every day like it was nothing, I was up there the other day just trying to like skate around, and you fucking can’t do it. Cause someone’s like, Uh, Can I get a photo?”

He also explains that he wasn’t sent to Samoa for musical reasons: “Motherfuckers think that my mom heard a song and was like, No, I’m not fucking with this song … I was fucking up. Outside of music, music aside from everything, I was fucking up.” You can watch the full interview below, via The Fader.