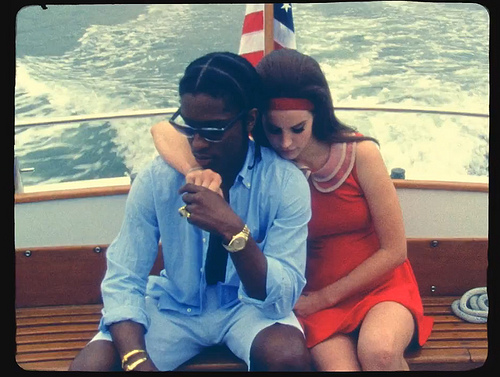 Following on from that grindingly repetitive trailer, you can now watch the JFK-inspired ‘National Anthem’ video in full.

Harlem’s pre-eminent pretty boy plays the ill-fated president; ubiquitous femme fatale Del Rey scrubs up as both Jackie O and (well, kind of) Marilyn Monroe. Del Rey, pouting underneath an towering bouffant, makes a passable Mrs Kennedy. Rocky, meanwhile, is a much more impressionistic JFK, rocking a reversed cap and hotboxing the Oval Office. Watching the faux-vintage footage, it’s hard not to think that Del Rey’s cannibalising her own legacy to some degree: having shot to attention with a collage of real-life found footage, she’s now playing make believe in her own ersatz home movies. [via Pitchfork]

In a neat bit of synergy, the release of the video has coincided with the emergence of Rocky’s collaborative track with Del Rey. ‘Ridin”, produced by The Kickdrums, originally galloped onto the web in April, but swiftly disappeared amid claims that Rocky was holding the track back for his forthcoming LongLiveA$AP album. You can stream the track over at Nah Right.