Watch footage of The Weeknd perfoming with Flying Lotus at XOYO 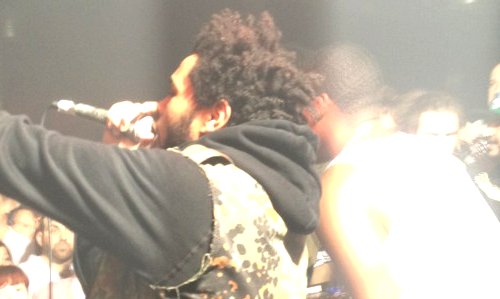 Update: Video has now gone up on The Weeknd’s official YouTube stream of Flying Lotus performing with the singer at XOYO. The clip shows FlyLo playing his (invariably barnstorming) remix of Lil Wayne’s ‘I Feel Like Dying’, as The Weekend jives around and chips in a few lyrics. Scroll below to watch. [via Pitchfork]

One plus of this weekend’s Bloc debacle: with a bunch of musicians suddenly in London with nothing to do, the capital came together last night to organise some of the most exciting impromptu parties you’re likely to see in a while.

Jacques Greene, Actress, Martyn and more contributed to one of the night’s most appealing line-ups, at Peckham Palais, but the two you’re most likely to be kicking yourself if you missed are the Hyperdub takeover at Rhythm Factory (with promoters Streets of Beige and Oscillate Wildly) and LooPY‘s party at XOYO. As well as each featuring a stellar advertised line-up (Kode9, Cooly G, Ill Blu, LV, Ikonika, Bok Bok and more at the former; Factory Floor, Oneman and Oneohtrix Point Never at the latter), both saw surprise appearances from not-quite-as-mysterious-as-he-once-was r’n’b star The Weeknd, performing with, of all people, Flying Lotus.