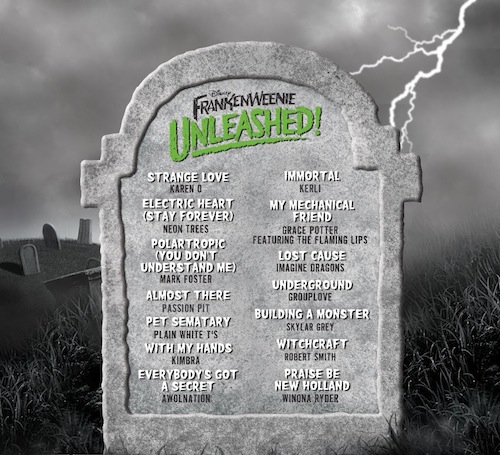 Frankenweenie Unleashed! will be released on September 25.

Frankenweenie is a 3D, black-and-white IMAX remake of Burton’s 1984 film of the same name about a boy who reanimates his dearly departed dog. The film will be in theaters on October 5, but will be preceded by both an original motion picture soundtrack (by frequent Burton-collaborator Danny Elfman) and an album of songs inspired by the film.

Frankenweenie Unleashed! features a new solo track by the Yeah Yeah Yeah’s Karen O, who also worked with Trent Reznor on a cover of Led Zeppelin’s ‘Immigrant Song’ for last year’s The Girl With The Dragon Tattoo soundtrack. Other songs to watch for include a collaboration between Grace Potter and the Flaming Lips, along with offerings from Robert Smith and Winona Ryder (who provides a voice in the film. [via Spin]