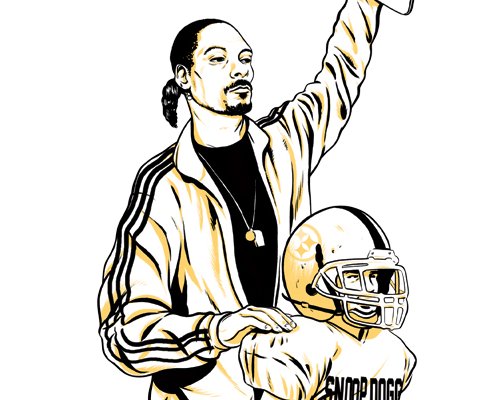 Another day, another attempt by Snoop Dogg to become 2012’s greatest renaissance man.

Not content with reincarnating himself as Snoop Lion on a forthcoming reggae album and turning dance music mogul as DJ Snoopadelic (lest we forget, he’s also a dab hand in the mix himself), the Doggfather lends his name to the Snoop Dogg Youth Football League – a non-profit American football organization aimed at getting inner-city children into sports, founded by Snoop in 2005.

In Maxim this month, Snoop Lion turns coach, talking the magazine through his favourite football moves – including something called the Centre Sneak, where “the quarterback runs to the right, and everyone on the team runs with him, like he’s got the ball. Then the center runs straight up the middle with nobody on him, because nobody knows he has the ball That’s an illegal play, but we did it anyway, you know what I’m sayin’?” Once a gangsta, always a gangsta.

You can stream ‘La La La’, Snoop’s first single as Snoop Lion, below.