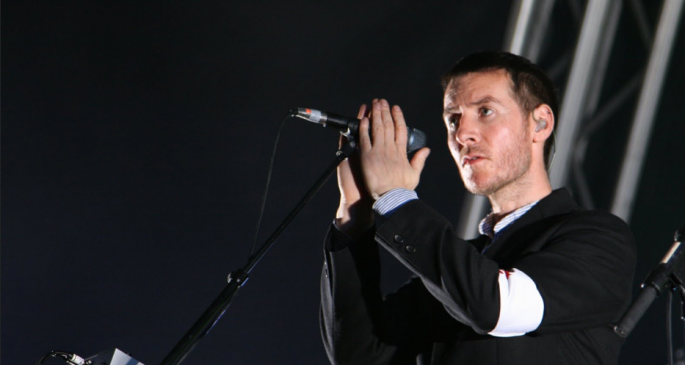 Massive Attack’s Robert ‘3D’ Del Naja has been armouring up for a new project, Battle Box.

The multi-disciplinary venture promises to “fuse music, art and discourse across one-off live events, exhibitions and exclusive vinyl releases.” The opening salvo from the project is the two-track Battle Box 001 12″, produced on 180g heavyweight white vinyl by The Vinyl Factory.

Battle Box 001 drops today, and the visual arm of the project is now open for public view over at Nowness. The video is a forbidding montage of Rorschach imagery, strobing lights and uppity poultry. The track imports the dystopian mood of Massive Attack’s 2003 LP 100th Window, but ‘Battle Box 001’ is a much rougher beast, characterised by rattling tribal percussion and growling bass. Guy Garvey contributes eerie processed vocals.

The 12″ is out today, and can be ordered exclusively here. Hotflush/Hemlock producer Guy Andrews contributes a remix on the B-side. Take note, completists: 30 copies feature individual signed sleeves made by 3D, 15 of which are in Biro, and the other 15 of which have been made with Paint Pen.