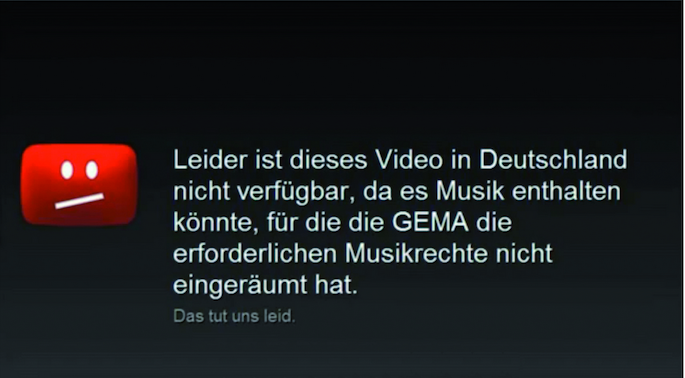 No end in sight for a dispute that continues to block German YouTube users from accessing certain music video.

TechCrunch reports that German royalty collection agency GEMA has broken off negotiations with YouTube. This is the latest round of negotiations, stemming from a dispute that began in 2009.

The history of the case, in broad strokes: When their contract expired in 2009, GEMA and YouTube were unable to reach agreement on a fee per streamed music video. In 2010, GEMA sued YouTube for distributing copyrighted material without permission. Then, last April, a German court held that YouTube must install software to prevent users from uploading GEMA content.

While negotiations to find an agreeable rate had continued outside the courtroom under today, the CEO of GEMA said via (Google Translated) statement: “Our position is clear: the use of the copyrighted repertoire creators need to be fairly compensated. Since 1 April 2009, YouTube has refused all proposals of an appropriate licensing.”

GEMA is also not pleased with the message YouTube displays to German users who try to access blocked videos (above), describing it as misleading and designed to negatively color the debate by giving the impression that GEMA is categorically refusing to license music to YouTube.

YouTube parent company Google released a statement on the dispute, noting that it has royalty deals in place across more than 45 countries, adding that it remains committed to “finding a solution” in Germany.

Last year, GEMA made headlines by radically changing its fee structure in such a way that would cripple German clubs and crackdown on DJs.