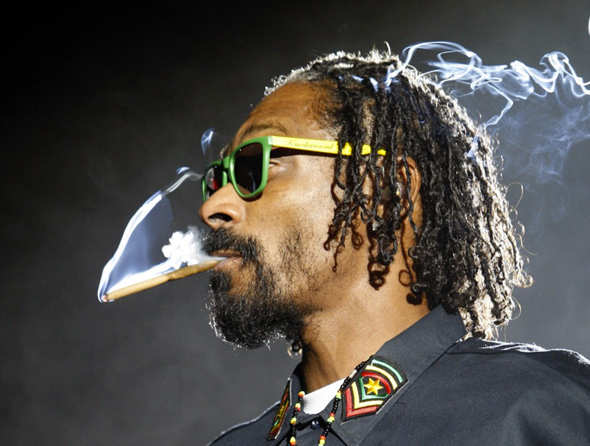 More details of Snoop Lion (né Dogg)’s forthcoming album of songs in the key of Jah.

AllHipHop note that Snoop’s contentious reggae LP Reincarnated will see the light of day on April 23. Although Snoop might have decamped to Jamaica to record the album, Reincarnated still features the sort of guest roster you’d expect from your garden variety hip-hop disc. As Complex report, serial guest artist Drake will appear, as will Busta Rhymes and T.I.. Professional dastard Chris Brown and Rita Ora are also confirmed to feature. Jamaican singers Mavado and Popcaan will provide a smidge of authenticity, and, as already reported, Diplo will produce.

Interestingly, Reincarnated will also feature another unlikely assistant – Snoop’s daughter, Cori B. The 14 year old has been putting out vanity tracks since she was 12 (cf last year’s telling ‘Daddy’s Girl’), and will feature on new single ‘No Guns Allowed’.

In other moderately interesting Broadus news, it was revealed this week that Snoop came within a hair’s breadth of joining G-Unit back in the early 2000s. The label’s DJ Whoo Kid revealed in an interview that the aborted move was planned to take place around the time of 50’s 2003 ‘P.I.M.P’ single:

“It was kinda close; it wasn’t like he was gonna sign, he was gonna have like a joint deal [with G-Unit]. During those days, he had joint deals with everybody – he had one with Master P…he was signed to everybody. But he wanted a G-Unit connection because ‘P.I.M.P.,’ when Fif did it, he didn’t have Snoop on there or nothing like that, so my introduction to Snoop, I was supposed to meet him in L.A., so I said, ‘I’ma take the ‘P.I.M.P.’ record to Snoop. I got Snoop to get on the remix, but it was a freestyle. When I came back to New York and I let Fif hear it, he was like, ‘I’m keeping this, man. This shit is out of here’…but during that time is when he wanted to be like Dogg Pound/G-Unit.”