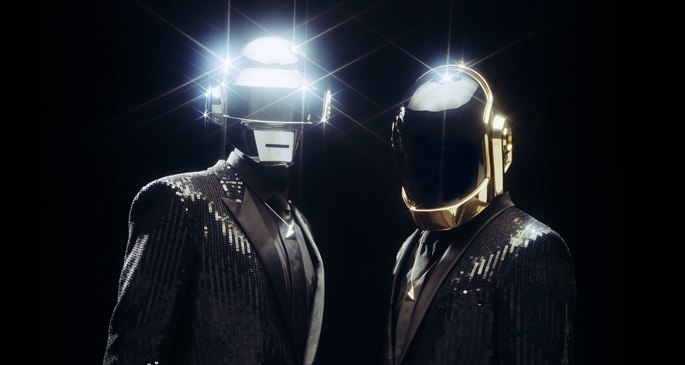 Following last night’s Coachella-aired commercial for their new album Random Access Memories, electronic idols Daft Punk have given their first interview of the year to Rolling Stone. Here’s what we’ve learnt from it:

– The duo will probably appear on the new Kanye West album – and it may well be a single, with a Chris Cunningham-directed video. (“At their Paris studio, they laid down a combination of live and programmed drums while Kanye worked out rough vocals on the fly. “It was very raw: he was rapping – kind of screaming primally, actually,” Thomas [Bangalter] says. “Kanye doesn’t give a fuck,” Guy-Manuel [de Homem-Christo] adds. “He’s a good friend.” Director (and longtime Daft Punk compatriot) Michel Gondry says that Kanye recently played him “two songs” that sprang from the session. “One of them, I told him it sounded solid and powerful – I envisioned a cube when I heard it,” Gondry says. “He told me, Chris Cunningham’s already directing the video!”)

– Despite all the hoo-hah, don’t expect them to tour Random Access Memories any time soon. (Thomas says “we have no current plans” to tour the new record. “We want to focus everything on the act and excitement of listening to the album. We don’t see a tour as an accessory to an album.” When they do finally hit the road, he added, it will be with a career-encompassing set list, not one overly focused on the new material.)

– Random Access Memories is inspired by the ’70s and ’80s. (“The Seventies and the Eighties are the tastiest era for us,” Guy-Manuel says. “And all these guys [Nile Rodgers, Paul Williams, etc] were tripping on meeting again and playing together again.” He adds: “It’s not that we can’t make crazy futuristic sounding stuff, but we wanted to play with the past.”)

– It’s also not that electronic – more human than Daft Punk’s last non-soundtrack album, Human After All, in fact. (“We wanted to do what we used to do with machines and samplers,” Thomas explains, “but with people.” Except for a snippet of “an Australian rock record” that opens the final track, “Contact,” Daft Punk foreswore samples entirely, and they limited the role of drum machines to just two of the album’s thirteen tracks. The only electronics come in the form of a massive, custom-built modular synthesizer that Daft Punk played live on the album … and an arsenal of vintage vocoders on which they manually manipulated factors like pitch, vibrato and legato.)

– They’re pretty ambivalent about being idolised by the EDM sect. (“Electronic music right now is in its comfort zone and it’s not moving one inch,” Thomas says. “That’s not what artists are supposed to do.” He adds that the genre is suffering “an identity crisis: You hear a song, whose track is it? There’s no signature. Skrillex has been successful because he has a recognizable sound: You hear a dubstep song, even if it’s not him, you think it’s him.”)

You can read the whole piece here – let’s face it, you probably already are – and stream a healthy two minutes of the video for ‘Get Lucky’, which features Nile Rodgers and Pharrell in a fantastic sequinned suit, here.