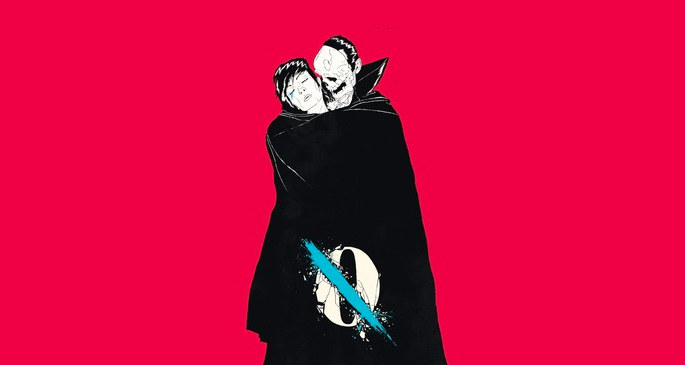 Desert rock kings Queens of the Stone Age have let out a teaser video for new album Like Clockwork.

Due for release on June 3, Like Clockwork is the Queens’ most anticipated release in a while, in no short part due to a role call of guests that includes former member and Foo Fighter Dave Grohl, former member and Mondo Generator frontman Nick Oliveri, former member and former Screaming Tree Mark Lanegan (tell us if you see a pattern forming here), Arctic Monkeys’ Alex Turner, Elton John and more. The 20-second teaser video was posted on Queens of the Stone Age’s YouTube channel yesterday, and shows the cutting lathe at work for the vinyl version of the album, accompanied by music from the record. You can watch it below.

Meanwhile, a new interview between Queens band-leader Josh Homme and London radio station XFM provides some insight into just how the hell Elton John ended up on the record [via Virgin Media]. According to Homme, speaking to the station’s Jon Hillcock, ”[Elton] was in a car listening to [Homme’s other band] Them Crooked Vultures and his assistant said: you need to hear Queens. The guy driving the car was an old room-mate of mine! So all of a sudden I get a phone call at my house on a Sunday. I picked up and he said: ‘Hello Josh, this is Elton’. I thought someone was messing with me.” [A quick aside: can you imagine getting a phone call out of the blue from Elton John?]

”He said, ‘The only thing missing from your band is an actual queen!'”, Homme continued. “I said, Honey, you have no idea.”