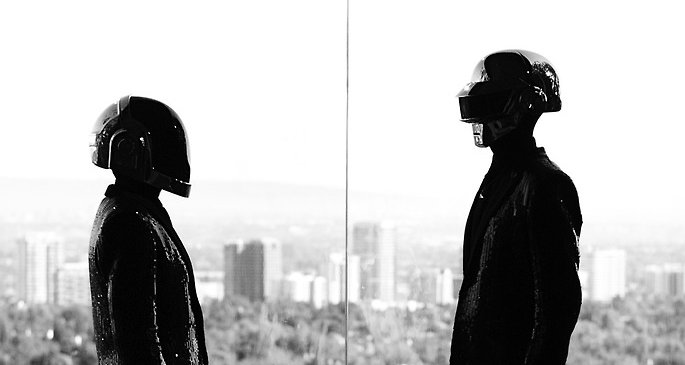 The French duo have been press-shy since announcing their latest album Random Access Memories, with GQ and Rolling Stone the only other outlets granted interview time so far.

In this short interview conducted with the ‘Everything is Embarrassing’ singer, they explain that their new album is “about technology going towards humanity, in a world where humanity is going towards technology. We tried to capture robotic emotions with music, replacing this time our electronic machines by real human beings.”

Elsewhere, they elaborate on the album’s title (“establish[es] a loose parallel between the human brain and the hard drive—both are somehow randomly fragmented devices”) and claim that they “just created a timeless bubble around us for the last five years in order to create the music we wanted to listen to” while making Random Access Memories.

In other Daft Punk news, a low quality recording of another track from the album, the Giorgio Moroder-featuring ‘Giorgio by Moroder’, leaked online yesterday but has since been taken down by the duo’s label. We’ve also heard murmurs of a big Daft Punk publicity stunt planned for the end of the month, but you’ll have to wait and see on that one.

Update: Guy-Manuel and Thomas spoke with Australian DJ The Doctor about ‘Get Lucky’, why they chose tiny Wee Waa to launch the new album, and their plans to not perform the album live. Listen to the rare radio interview on Triple J’s website.

You can watch FACT TV’s recent episode of Record Shopping with Sky Ferreira below.