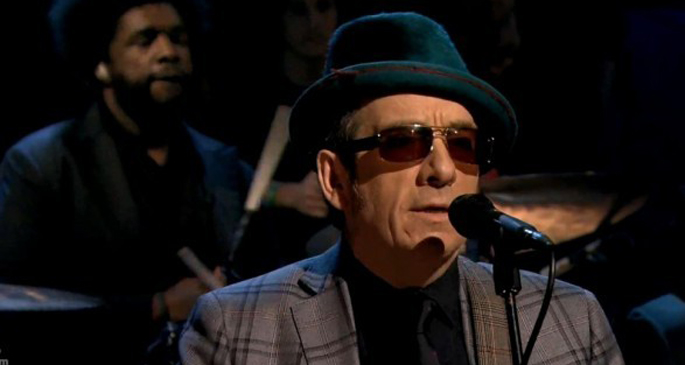 The Roots‘ tenure as the house band on talk show Late Night With Jimmy Fallon have seen them in some rather unexpected collaborations, but occasionally those pairings seem just natural. This is how Elvis Costello figured out that he wanted to record an album with the Philadelphia rap veterans, and as Questlove says “It was really love at first sight”.

Recorded mostly in secret Wise Up Ghost was originally intended as a short EP, but the more the band recorded together the more it begin to fall into place. Questlove said of the sessions they originally wound up with “13 or 14 songs”,  “But then we said, ‘Ooh! Wait a minute! Let’s replace four of these songs with four better songs!’ And now we have the tightest 12-14 song collection out of about 20 songs that we made.”

Described as a dark album, we must admit it’s hard to imagine what the collaboration will end up sounding like. Questlove has described it as “A moody, brooding affair, cathartic rhythms and dissonant lullabies.” going on to say that he “went stark and dark on the music, Elvis went HAM on some ole Ezra Pound shit.”. Well, that’s that then – we just want to hear the finished product. [via Consequence of Sound]