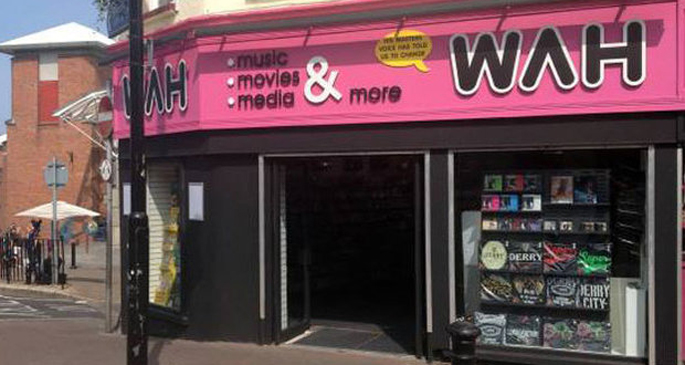 When UK-based entertainment retailer HMV went into administration last year (which FACT covered quite thoroughly here and here), Irish employee Tony Cregan had the bright idea of opening his own alternative to replace the apparently profitable branch in Derry where he worked.

The store finally opened last week, cheekily branded HVM and emblazoned in HMV’s recognizable magenta, black and white colour scheme. Cregan clarified this decision in an interview with Entertainment.ie, saying “We thought, what is the point calling the new shop Local CDs or whatever, we’ll just call it HVM. HMV is gone.”

It was hardly surprising then that Cregan got a letter from HMV’s legal team, as the company was saved from bankruptcy by restructuring experts Hilco. Claiming that Cregan’s store would “cause substantial damage to our client’s reputation and goodwill”, HMV ordered HVM to change their name or face the consequences, so Cregan had to get creative.

After overhearing a thickly-accented customer exclaim “HM what?” the owner had the bright idea that he could simply flip the sign. “So we just turned the sign upside down and now it’s called WAH.”, Cregan confirmed, and noted that there is also a mischievous speech bubble next to the logo, reading “His Masters Voice has told us to change”.

Cregan has vowed to keep on fighting the entertainment giants, revealing that they even told him he needed to amend the colour scheme too. It looks to us as if the story might not be over just yet. [via The Guardian]