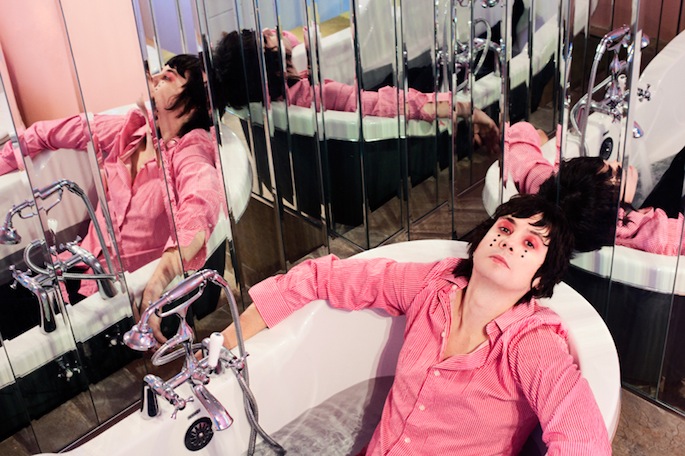 The Glass Candy / Chromatics mastermind stays busy with a handful of film projects.

Italians Do It Better boss Johnny Jewel recently sat down for “an extremely long” interview with Noisey. Along with explaining why the delay behind the long-awaited After Dark 2 compilation, Jewel opened up about the other projects he has cooking, namely film and television soundtracks.

“I’ve been working on [the Logan’s Run soundtrack] for about three years, but that one is still in pre-production. It might not even happen,” he explains. “Ryan [Gosling] left the film, and Nic [Winding Refn, the director of Drive] isn’t sure what he’s doing. I have a pile of stuff for Logan’s Run that is awesome, but it’s a work in progress, and it’s very different from anything else that I’ve ever done, so it’s really easy to know which things are for that.” Jewel originally worked with Winding Refn on a score for Drive that was rejected and eventually released as Symmetry’s Themes for an Imaginary Film (below).

Jewel is also teaming with Gosling for the actor’s directorial and screenwriting debut, How To Catch A Monster. Shooting in Detroit, it features Gosling’s Drive co-star Christina Hendricks. “It’s more doo-wop, disintegrated rockabilly mixed in with industrial sounds,” says of the film’s soundtrack. “So we’ve been listening to a lot of Alan Vega and the Shangri-La’s. It’s a really bizarre, fantasy-type story, in the vein of Goonies meets Twin Peaks.”

Additionally, he scored a Fox TV pilot that stars Chloe Sevigny, and he’s working on the music for an indie film called Beautiful Now “which is basically the last five minutes of a woman’s life before she blows her brains out.” Also in the works is music for a movie called Pimp, featuring Mary J. Blige, Dakota Fanning, and possibly Rihanna.