And this one time… the best Bandcamp releases of the month: August 2013 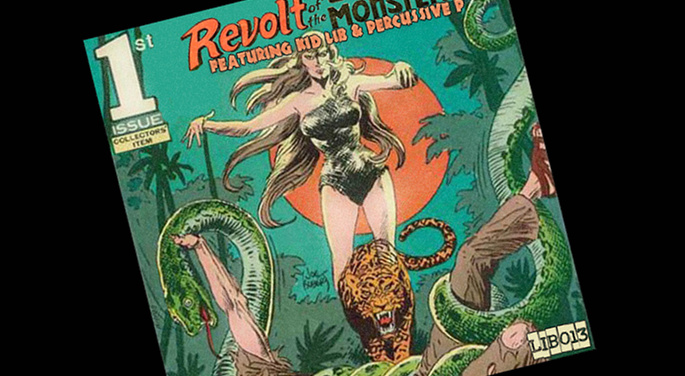 The internet is a funny old place.

With the advent of the ‘future’ tag for music genres in recent years it struck me as odd recently that so much focus and energy should be poured into so-called futuristic versions of established genres and ideas when the communication technology that makes such claims possible is ultimately atemporal.

Sure the internet is the future, but the window it opens onto the possibilities that are in front of us is equally busy with all of the things happening around me right now I don’t see, and all of the things that have already happened and which I didn’t know about.

Looking up the ‘future’ tag on Bandcamp for this month’s column I was quickly struck by a sort of numbness. I found myself thinking that I wasn’t going to find anything truly futuristic or arresting. Not without a lot of effort, and not by clicking on a ‘future’ tag in an online content repository. The future just isn’t that easy to find. Looking at the related tags column I saw ‘present’, and soon enough I was also trawling the ‘past’. Both proved equally, if not more, fascinating options.

Bandcamp is the future to a degree, a future that’s unfolding in front of us as we go along: playing with it, tweaking it, testing it, putting it up against the systems of the past to see if it’s worth anything. Again the focus on its future validity, on its potential to free us from the present deadlock, makes us forget that it is also possessed with the atemporal qualities of the technology that makes it possible, just like all the other online evolutions we’re wading our way through at an increasingly faster rate.

There’s value in taking time to actually stop online, take a minute and look at the present and the past through the technology instead of constantly thinking and obsessing about what’s to come.

This month in Bandcamp we have a mixed bag of vibes from South London instrumental jawns to Auto-Tuned Saharan raps via Irish electronica and unofficial rap remixes from one of the most slept-on producers around.

Welcome to South London. Let’s get rye to it. Youngest brother to Mo’ Kolours and Tightface (both of whom can be found on the One Handed Music label), Jeen Bassa is a talented producer who shows off a penchant for soul grabbing, head nodding instrumentals on Rye About It volumes 1 and 2. Both albums are a collection of short tracks, some covers, some originals, all certified dope. If they continue like this the brothers are set to become London’s answer to Oxnard’s Jackson family.

Volume 2 can be found here.

I was first put onto Kidlib by Om Unit a few months back, after an edit of his started doing the rounds. His latest Bandcamp release sees him alongside Percussive P repossessing a string of classic ’90s jungle and drum n bass sounds and ideas. Amid a myriad sonic references and samples the pair work up a pretty solid selection of dancefloor jams, packing in enough frantically chopped up breaks that the release should perhaps come with a health warning for flashbacks. One of the most solid throwback jungle releases you’re likely to come across. And the cover is a touch too.

I don’t know why or how but a good chunk of the most solid releases I keep coming across on Bandcamp seem to originate from Portland. There’s clearly something in the water there.

I stumbled on Kani thanks to Bandcamp’s weekly show presented by Andrew Jervis, where the Saharan MC’s Auto-Tuned raps and “so cheap they’re amazing” synth workouts and rhythms completely stopped me in my tracks. The album is a by-product of Sahel Sounds’ Music From Saharan Cellphones compilation.

The BasedGod of the Sahel as the label calls Pheno S. is clearly on some next shit. I can picture him making his electronic hip hop from somewhere in the middle of the desert, tapping into some serious cosmic consciousness as he writes lyrics and hums melodies to himself. The cover is also appropriately psychedelic.

Available as digital and limited vinyl (the vinyl isn’t on Bandcamp yet).

Irish producer Bantum is someone I discovered early last year after a chance encounter with the Lightbox collective of Irish artists who were touring the country off the back of a crowdfunding effort – you can read more on all that in a FACT op ed that ran a few months later. His music offers an interesting middle ground between electronic and alternative/indie vibes, which he’s clearly made his own over the years as exemplified with Legion. The vocal turns add a much needed human dimension and grit to the music and the album unfolds in an organic way that leave you pleasantly captivated without feeling the need to skip along.

Available as pay what you want digital or vinyl via the label’s Bandcamp.

Another gem from Portland unearthed via the Bandcamp weekly, Natasha Kmeto is a singer, songwriter and producer whose latest, Crisis, is an album of brutal honesty shaped into stunning electronic songs that effortlessly reference hip hop and dance music. Written during a time of personal upheaval and heartbreak, the music on Crisis has this quintessential quality that comes from honesty in art and simply transcends genres. It’s just damned good music.

Available as digital and cassette.

Visionist has been one to watch for a while now and this EP he put out through his Bandcamp further highlights why. Crying Angels features bleak, stripped down reworks of grime productions including XTC’s ‘Functions On The Low’, DJ Oddz’ ‘Champion Remix’ and Young Dot’s ‘Bazooka’. Each track comes out at the other end sounding all the better for Visionist’s paranoid take. The closest to London in audio format you’ll get to without buying a ticket to come visit.

If you don’t know about Kan Kick I feel bad for you son. But it’s ok, you can remedy that with a tribute mix Kidkanevil put together earlier this year.

Kan Kick aka Kan Zulu is one of the west coast’s most slept-on production geniuses, on a par – for some at least – with the blunted ingenuity of Madlib, with whom he’s collaborated on more than a few occasions. Like Count Bass D and other forgotten hip hop production geniuses, Kan has taken to releasing material via Bandcamp in the past year including his debut From Artz Unknown, which remains a stone cold classic.

This remixes release sees Kan flip the script on a variety of rap classics and lost gems, unfettered by linguistic or under/overground boundaries. A personal favourite is the Freeway remix that takes the original to an entirely new dimension.

Following on from my philosophical rant-cum-introduction, one of the things I stumbled across in my tag search was this incredible album from 1978. The tag I reached it through was actually “global”, though it nicely fits in with this atemporal idea I mentioned.

Unlike previous tag finds this one comes with a nicely detailed back story, having been issued by the same Sahel Sounds label responsible for Pheno S.’ demented desert raps. Mammane Sani Abdullaye is a legend in Niger’s avant garde and a pioneer of early West African electronic music. La Musique Electronique du Niger is his first and only album, released in 1978 on cassette in association with the government. It was lost to time for a while and then the internet happened. And so here we are in 2013 able to enjoy Sani’s incredible organ compositions. Perhaps even more striking than the music and back story is how the lengthy instrumentals on here have more than a hint of the video game music of my childhood in the 80s. Imagine the video game this could be the soundtrack to.

Available as digital and limited edition vinyl via Sahel’s shop.