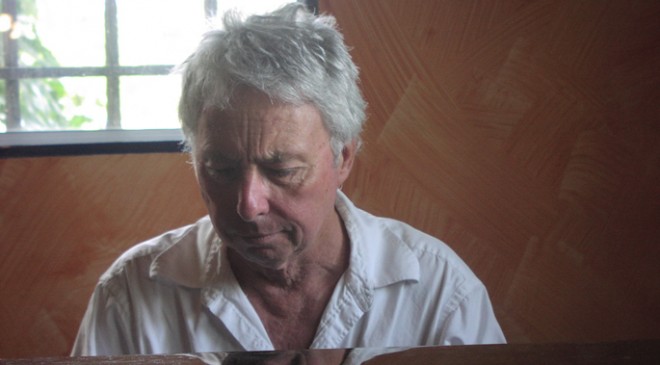 The work of ambient guru and leading minimalist Harold Budd is to be partially profiled in a new anthology, Buddbox.

In the popular imagination at least, Budd is most feted for his collaborative works, teaming up with Brian Eno on 1980’s Ambient 2: The Plateaux Of Mirrors LP and 1984’s essential The Pearl – a record that very narrowly missed out on inclusion in our Top 100 Albums Of The 1980s list – and recording with Cocteau Twins’ Robin Guthrie on a number of projects. For all his high-profile team-ups, he’s an extremely well-respected practitioner in his own right: since 1978’s debut set The Pavilion Of Dreams, he’s produced a steady stream of piano-based work that any committed new age enthusiast will already be thoroughly familiar with.

Later this year, seasoned ambient imprint All Saints Records will reissue a sizeable proportion of Budd’s discography, collecting seven albums in a new vinyl anthology. The earliest release in the Buddbox package is 1981’s The Serpent (In Quicksilver), with 1984’s dysphoric Abandoned Cities and 1987’s gentle piano/synth set The White Arcades also included.

Budd’s 1990s output is also represented, with 1991’s By The Dawn’s Early Light (notable for the inclusion of Budd reciting poetry) and Ruben Garcia/Daniel Lentz collaboration Music For 3 Pianos (1992) both making the cut. 1994’s Through The Hill, recorded with XTC’s Andy Partridge, and 1996’s Luxa round out the list.

Of the above, The Serpent (In Quicksilver), Abandoned Cities and Through The Hill will also get a separate vinyl repress, with each limited to 500 copies. In addition, All Saints will also put out a new 2xCD retrospective appraising Budd’s long and busy career.

Buddbox will hit shelves in November. The package arrives hot on the heels of Root Strata’s imminent reissue of Budd’s 2006 LP Perhaps [via The Wire]