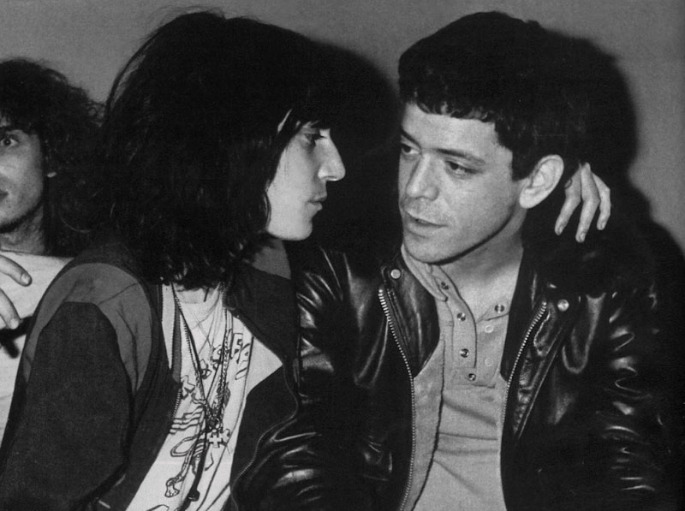 Tributes to Lou Reed have been pouring in since his death was announced on Sunday evening, with his former Velvet Underground sparring partner John Cale mourning his “schoolyard buddy” while dozens of the musicians he influenced, including David Bowie and Morrissey, paid tribute with their own messages.

Two more direct descendants of the punk poet added their thoughts today via Rolling Stone, with Patti Smith (pictured above with Reed in the mid-70s) honouring a “very special poet” and describing Reed as “a New York writer in the way that Walt Whitman was a New York poet.” She continued:

“One thing I got from Lou, that never went away, was the process of performing live over a beat, improvising poetry, how he moved over three chords for 14 minutes. That was a revelation to me.”

Talking Heads frontman David Byrne eulogised Reed in a longer statement, recalling the numerous times he came to see Byrne’s band at CBGB’s and one occasion when three of the Talking Heads visited Reed in his New York apartment:

“Lou was talking a mile a minute and going through tubs of Haagen-Dazs ice cream while he suggested some variations and adjustments we might make to some of our songs. He began to play our song ‘Tentative Decisions’ (a very Lou song title, no?) but he played it way slower than we were doing it. He was showing us how the song might be as a ballad — which made it more melancholic and elegaic than our bouncy version. It suddenly was of a piece with “Candy Says,” “Some Kind of Love” or “Pale Blue Eyes.”

“Of course we were in awe — here was one of our heroes playing one of our little songs. But by then it was the wee hours of the morning, dawn was coming, and we were all pretty spaced out — and we three probably had day jobs to get to at that point.”

Read FACT’s full Lou Reed obituary and dig into our pick of the lesser-known Lou Reed recordings you need to hear.