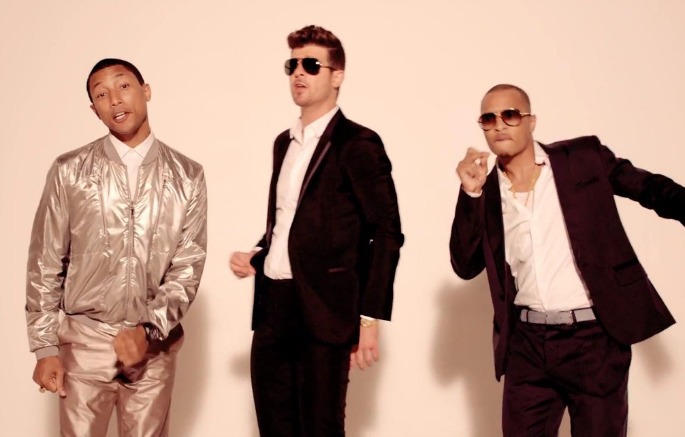 Well, the Gayes are still mad. Back in August, Thicke, Pharrell Williams and T.I. filed a pre-emptive lawsuit against the family to determine that they didn’t copy Gaye’s 1977 song ‘Got to Give It Up’ or the Funkadelic track ‘Sexy Ways’ when composing 2013 enormo-hit ‘Blurred Lines’ (although they did admit to being influenced by Gaye’s classic funk groove and cowbell vibes).

Thicke’s team then reportedly offered the Gaye family a six-figure sum to prevent them from launching a copyright infringement suit, but the offer was said to have been rejected.

Now the Gayes have launched a fiery countersuit claiming that Thicke not only stole ‘Blurred Lines’ but also pilfered ideas from Gaye’s ‘After The Dance’ for another one of his songs, ‘Love After War’; they also claim that a “Marvin Gaye fixation” runs throughout Thicke’s entire body of work.

There’s more! Gaye’s family argue that publisher EMI failed to protect Gaye’s music and tried to intimidate the family into dropping the suit. EMI should lose profits from ‘Blurred Lines’, the family argue, and surrender their rights to the Gaye catalogue. The family also claims to have never been offered the six-figure sum previously reported.

Stereogum report that the Gayes have wheeled in musicologist Judith Finell, who claims that ‘Got To Give It Up’ and ‘Blurred Lines’ share “at least eight substantially similar compositional features” which “far [surpass] the similarities that might result from attempts to evoke an ‘era’ of music or a shared genre.”

Play judge by listening to both songs below: