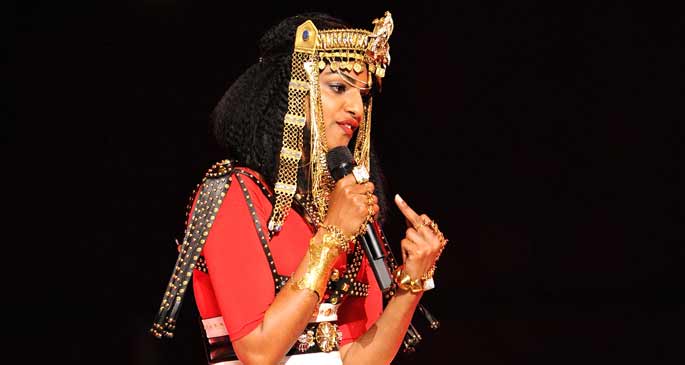 It Iz What It Iz.

In an interview with U.S. radio station NPR, M.I.A. gave a spiritual reason for her humorous (and subsequently quite troublesome) middle-finger to the Super Bowl audience in 2012. Since the incident, the NFL have been desperate to prove that the gesture was harmful (and therefore be able to sue for a great deal of money), but M.I.A. has managed to rustle up quite the excuse. She now claims that she was in fact performing the Matangi mudra, a sacred gesture in her ancestral Sri Lanka:

“In America you have gang signs, and people throw up initials and stuff like that. Well, 5,000 years ago, there was thing called a mudra, which is your sitting position when you do yoga or you’re meditating or praying or whatever. And you have different ones based on what you’re meditating over. There’s not a lot of them that are named after gods and goddesses, but the middle finger is specifically named Matangi — the Matangi mudra.”

As hard as that is to believe, you can’t fault her for trying, and while the actual Matangi mudra appears to use two hands (it’s not simply a case of flipping the bird, as much as we wish it was), we think she’s confusing the message. If she’s claiming that the gesture means different things to different people, surely she can understand the NFL’s case that it means something very specific to them. We’re not sure this case will come to a resolution any time soon.

FACT’s very own Chal Ravens had a chance to sit down with the polarizing star and talk about her acclaimed new full-length Matangi in depth, and you can read the interview in full here. [via Stereogum]