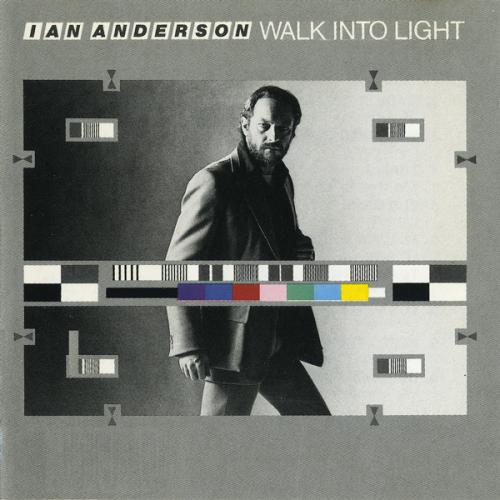 I present you with the possibly ill-advised pairing of synthesisers, drum machines, Jethro Tull’s frontman and his flute. The word “misbegotten” has often been employed to describe records like this one. Not by me. I think this record is a beauty and let me tell you why. When I picked up this album many, many years ago (yes, vinyl) at the 4th and Broadway Tower records in New York City, I was on one of my bi-weekly record excursions, where twenty bucks would score me three new and maybe one cut-out bin record plus enough for a slice and soda.

I don’t remember what other records I purchased the day I bought Walk Into Light but I still recall the moment I first saw the jacket: a grumpy looking guy in a suit (Ian Anderson) looked out and directly at me as he walked off towards the right of the jacket. A flat cylindrical shape with a variety of colored cells – I guessed computer generated – ran across the width of the entire thing. It all looked sufficiently futuristic enough, in a very understated way, for me to flip it and check the back. That’s when it got good. I was already a nerd for production credits by that time, and though I recognised neither the artist in question here or his production compadre Peter-John Vettese, I was drawn by the list of “Instruments Used” at the bottom of the jacket: Rhodes Chroma and Expander, Yamaha CP80, Roland JP8, Promars, MC202, Emulator, Linn Drum Computer. It read like a robot market, like the baby version of the gear list on one of my beloved Tomita albums. I was sold.

I think it took me a bit of time owning the record before I realised this was a solo album by the lead guy from Jethro Tull. This was a band I certainly knew from listening to Classic Rock radio but I never paid much attention to them. They sounded like old cigarette butts and wet fringed leather to me. A musty, creaky sound.

However, just like its cover promised, the music is of a slightly perturbed man singing about his grey world with just a hint of affection as the most colourful, flat-yet-shiny machine music enveloped his elegant, nasal voice. Occasionally you’d hear Anderson’s signature flute playing, but it blended so well with the trills and thump coming from the Rhodes Chroma, Linn Drum and company that you couldn’t tell it wasn’t synthetic. This was machine music as perfectly orchestrated as what The Human League had stormed the US charts with a year or so previously – but it was somewhat proggier, at times more melancholy and, on the lyrical end, often endearingly awkward. Laugh Out Loud Eighties and all that. But lyrics really didn’t matter here. Peter-John Vettese managed to surround Anderson with what are, to me, some of the loveliest final miniature excursions of the original analog synth era before digital synths took over.

Having read up on the record years later, I learned it was not only a flop, but that Anderson rejected it as too cold: he thought it could have used some more electric guitars (there are a few on the album, but they are negligible) and a live drummer to make it better. In his world, perhaps. But to me, the record stands out as one of the best, most natural-sounding dabblings by a “rock icon” in that mysterious universe of synthesisers and electronics. And it’s one of the few albums where the sleeve almost perfectly projects what you will hear before you first set down that needle. I have still never listened to a Jethro Tull album, by the way.

Velez will release a slew of material in 2014, including four EPs and an album. A selection of his work, old and new, is available through his Bandcamp page.