My Favourite Record is a new weekly feature where we ask musicians we rate from across the spectrum to pick their most cherished album – a development of our occasional On Record feature, and a chance to take a peek at the albums that maketh the artist. Today’s entry: Ø Metri (Sähkhö, LP, 1994) Picked by: computer musician […] 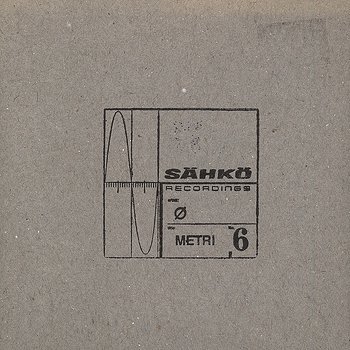 “When I first moved to Berlin when I was super young I didn’t know anything about electronic music. I first started clubbing by going to drum’n’bass nights at Icon, and then started working at Cookies, which back then was pretty raucous. Through friends I met there, I got deep into minimal; at after-hour parties like Beat Street people like Villalobos and Hawtin would play marathon sets. Berlin has always been in a state of transition, but it must be said that it felt very different back then (leaving a certain amount of room for nostalgia!). In a way, it was way less international, savvy and quantified, people would spend hours getting dressed up in 2 Euro outfits cobbled together from Humana, and there was a genuine sense of abandon and possibility. Clubbing was very casual, but also a lifestyle. Working in a club gave me a passport to jump between different nights, and as most of my interactions were in German, the mix of foreign language and non-teleological minimalist sounds, augmented by a fair amount of chemicals, in stripped down club environments, created a sense of time not existing (what’s a weekday?).

“I initially came across Pan Sonic around that time and then through a friend got a burned copy of Metri, which blew me away. It seemed so simple and mechanical, but also very human and sensual. It was distinct as it felt like a techno record for personal listening, but didn’t dwell in an ambient lull. I listened to it the most when I moved to California. It created a weird accompaniment to my new sunny surroundings. I felt very alienated when I first moved back to the US, so this record let me sort of wallow in that feeling. I was also newly pursuing academic music, and this was a sort of bridge between what I was into before I moved and what I was being told was academic music. There was still this ‘no beat’ rule in the academy, which I found strange and conservative. In a way, those attitudes made me feel more resolute in my feelings about divisions between genres, and this record was a weapon to throw at detractors, in a sense.

“I also got deep into synthesis and the purity of sound quality that can be achieved, and by that point was really into gnarly, but crisp sounds. I had a problem throwing too much into my pieces (I still do), so this record was an important part of learning to peel layers away to their essence, letting one idea come to fruition, instead of jamming everything into every piece. I love the way that the album unfolds, it really takes its time and sets the mood. I also love that it mixes musique concrete with synthesis, dance with ambient. I come back to this record every few months.

“In a track like ‘Kuvio’ you can hear what I often refer to as the ‘Vainio loop’, which is a type of metric modulation where one loop is shorter than another creating interesting new relationships between the two. I visit this all the time! My good friend and great musician Scott Arford had the genius idea of playing two whole Pan Sonic records at the same time during his after hours parties in Oakland, and they would somehow always work, phasing in and out of grooves. I’d recommend people try it; it always produces something amazing.

“I especially love that Mika Vainio mixes the pace of the album – with noise and jacking dance and extremely minimal bleeps that barely pulse out a rhythm. I find this sort of unorthodoxy incredibly inspiring; so many records sound exactly like they are ‘supposed’ to sound, even those under the ‘experimental’ umbrella. I found his approach liberating. I can’t say how many people are familiar with this record, or his music at large, but he has created such a singular palette and universe that it feels timeless, there is always something new to discover and it isn’t vulnerable to passing fashions.

“I love that his sounds are always shifting and moving, even if very slightly. My old professor, the brilliant composer John Bischoff, once told me to never let a sound stagnate, which happens a lot in loop based music. It’s so important that each sound has a life that is shifting and moving and telling its own story. Mika Vainio is a master at this.

“I think some people would consider this music mechanical, or sterile, or even cold. But I find it extremely human and sensual, without reverting to cliched tropes of emotion and affect. When listening to it alone it feels really personal and delicate, but the clarity of tone and pulse dictate that in a club environment it can sound incredibly heavy and muscular, which is a balance I try and find in my own music. Muscular and intimate.

“I think I can hear that it had a profound effect on both ‘CAR’ and Movement, and even some of the newer stuff I’m working on. It’s been pretty foundational for me. While driving, ‘Kentta’ sounds like wind noise until the bass drops – which in retrospect was very influential on ‘CAR’ – I love how music can sometimes integrate so seamlessly into an environment that it creates an uncanny scenario, and makes you hyper aware of your movements and feelings, implicating you in its universe, and implicating itself in your universe. It’s a hard thing to accomplish. I find that certain Scott Walker records can have a similar power.

“I can hear the influence of the sound design in tracks like ‘Terminal’ from Movement. I love the clarity of the sounds, there is very little if no reverb. I like that if a sound is going to exist in a work that it has to stand on its own legs, as a bold statement; it can’t hide behind a haze. I’m extremely drawn to hard cuts and stark contrasts in music, and the physicality of pure tones.

“I played VOLT Festival in Uppsala, Sweden last year. It was a pretty incredible line up, with Model 500 and other great people playing, and was so excited to see Mika Vainio perform, but then realized we were booked to play at exactly the same time. Part of me wanted to encourage people to go in the other room, as it isn’t that often he plays out! I did see him in the hotel lobby, but honestly didn’t know what to say without coming across as a super nerd. Hopefully I’ll get the chance to say thanks again one day!”

Herndon latest EP, Chorus, is out now on RVNG Intl.