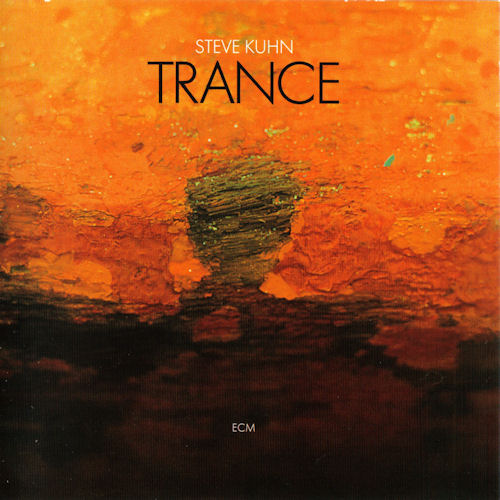 Trance is the eighth album from New York-based pianist Steve Kuhn, and in a way this release was his coming of age in the jazz world.

Kuhn is originally from New York and moved to Boston to attend Harvard and the Lenox School of Jazz, where in the summer of 1959 he studied alongside Ornette Coleman, Don Cherry and Garry McFarland and got to hang out with and learn from Kenny Dorham, Bill Evans and Max Roach.

Right after his scholarship, Kuhn started to play for Dorham at Turbo Village, a club in the Bed-Stuy neighborhood of Brooklyn, and that’s how his career as a pianist was launched. Right after, he became the pianist for John Coltrane’s quartet. Thinking he wasn’t up to par with Coltrane’s groundbreaking jazz, he left the band and it took him almost a decade to release his first records under his own name.

So in the late ’60s, after a few jazz albums for labels like Impulse, Buddah and Prestige, Kuhn moved to Stockholm in Sweden to research his sound and advance his craft. At the time, Manfred Eicher, owner of the fantastic German label ECM, got in touch asking Kuhn to record an album for him. The label was only a few years old and Eicher’s motto was to release only original compositions.

Kuhn never did a full-length of purely original material, but he accepted and started writing what would become Trance. He moved back to New York, broke, got a Fender Rhodes from his mentor and friend Bill Evans, and gathered the remaining members for what would be his rebirth: a quartet featuring the mighty Jack DeJohnette on drums, Steve Sallow (most famous for his recordings with Gary Burton) and the tremendous NY percussionist Sue Evans.


“It’s a groundbreaking album, almost romantic in its approach”

Trance is a fantastic and absolutely underrated jazz album. It’s an album that defines Kuhn as an amazing and versatile pianist and composer, and also defines the sound of jazz that ECM would introduce to the world in the ’70s, while a lot of American labels were getting more and more ‘commercial’ and diluting jazz’s essence, with devastating consequences for the musicians involved.

Recorded in November 1974 at New York’s Generation Sound Studios, Trance sees Kuhn alternate between piano and Fender Rhodes. With the help of his supporting trio, the result is an impressive blend of fusion, free jazz and Latin jazz. Songs like ‘Trance’, ‘Something Everywhere’, ‘The Sandhouse’ and a ‘A Change Of Face’ are massive, and extremely mature in their writing and execution. It’s a groundbreaking album, almost romantic in its approach. Kuhn went back to Stockholm to mix the record for Eicher, and right there wrote and produced Ecstasy, his second release for ECM. Both albums were released in 1975.

Now 76 years old, Kuhn is one of the last American jazz masters still alive, and is still performing around the world. ‘Trance’ remains a masterpiece and a key release for any jazz aficionado.

Derradji’s Still Music will mark its 10th birthday in style this year with the release of Laurent Garnier’s first 12″ for the label plus a reissue of Armando’s ‘Land Of Confusion’ and Bam Bam’s ‘Where’s Your Child’. Find out more on the website.