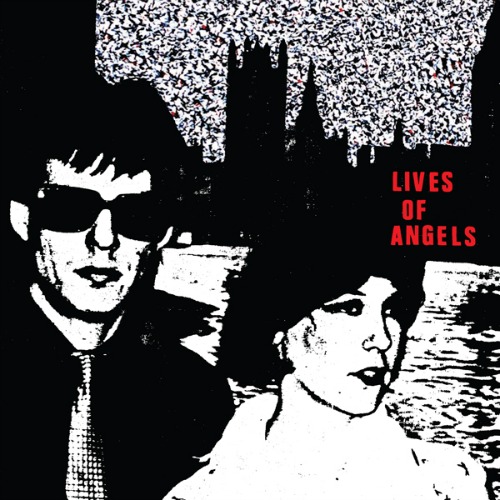 Fittingly for a band called Lives Of Angels, I stumbled across Elevator To Eden not so much by chance as by serendipity. Released in 1983 on the underground cassette label Color Tapes, the album would never have appeared on my radar if it weren’t for a university friend of mine who just so happens to be the son of Gerald O’Connell, the creative force behind the band.

At the turn of the 1980s, O’Connell had been working on material for Mystery Plane, a band that included his wife Catherine on keyboards and backing vocals. In 1982 the pair of them left to form Lives Of Angels and focus on O’Connell’s own songs, which, as he told me in a recent exchange of emails, he felt were more “oblique, atmospheric and evocative” than the narrative style and social commentary of Mystery Plane. The result sounds both of its time, with tracks like ‘Imperial Motors’ and ‘The Rock Drill’ comfortably nestling under the gloomy clouds of British post-punk and goth, and oddly out of time; its homemade quality placing it outside of obvious chronological signifiers as the motorik riffs and spartan drum patterns loop over and over to  infinity.

O’Connell was unimpressed by the musical offerings of the early ’80s (with the exception of New Order, Cocteau Twins and Depeche Mode, he notes), instead drawing from San Francisco psychedelia, Van Morrison’s Astral Weeks, Congolese guitarist Dr. Nico and the full pantheon of krautrock (especially Amon Düül II, whose song ‘Archangels Thunderbird’ contains the line, “There is no elevator to Eden but a hole in the sky”). Keyboards and some vocals were provided by Catherine, who also acted as editor, making changes to the arrangements or pointing out inappropriate drum patterns (hence her credit in the sleeve notes as “percussion censor”).

As one of the first releases on Color Tapes, the album suffered from a lack of proper distribution, disseminated instead through the UK’s loose network of DIY bands, indie record shops and fanzines. There are probably a few hundred cassettes out there, reckons O’Connell, maybe more, given that people often dubbed new copies to pass on, but “low-key hardly describes it.” He also sent the album to a number of music journalists, including Sounds writer Johnny Waller, who picked it up for release on the new label he was forming with Clive Solomon, Fire Records (then home to an early incarnation of Pulp). The album was remixed and resequenced for a vinyl pressing in 1986, but a wrangle between the label and studio meant the new mix was never quite satisfactory to O’Connell’s ear, leaving him disillusioned with the whole process. In 1987, his son (and my friend) Rory was born, and that was pretty much the end of Lives Of Angels.

The Fire Records mix is actually the version I have, and until I did some research for this piece I had no idea the album was actually recorded some five years previously. After initially filing it alongside post-punk, goth and the electronic experiments of the era that people now refer to as ‘minimal wave’, I now hear it afresh as a pretty impressive example of early ’80s home recording; a DIY interpretation of the elegance and ambition of the previous decade’s krautrock. That, I think, speaks volumes for the album’s richly evocative mood, open to divination by any listener.

In 2012, the San Francisco label Dark Entries gave Elevator To Eden a well-deserved reissue (in slightly condensed form), and according to O’Connell there are now plans to put out more material from the Lives of Angels archives. “You have no idea how rewarding it is that people are interested in what we did all those years ago,” says O’Connell. “Catherine had a very happy time doing all that stuff, it was brilliant, and I felt that it was a success artistically. It deserved more attention. Better late than never.”