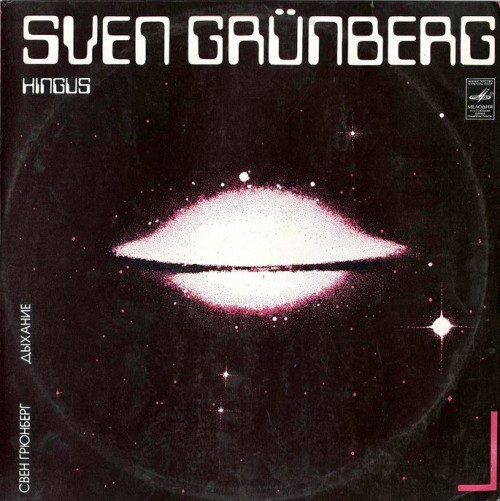 I wish I could say I chanced upon Hingus in some wilting ‘$2 Or Less’ box, or cabbaged it from a vengeful ex. Instead, I found it the way most of us find this sort of thing – stumbling along the YouTube breadcrumb trail until something interesting turns up. Not that Hingus is the sort of album you can stumble upon: dazzling, stately, and huge in just about every way, it monopolises your attention. You might as well say that Richard Dreyfuss stumbled upon the mothership.

Composed in the late 1970s and released in 1981, Hingus is a fantastically grand album of astral pieces-for-synthesizer, created by Estonian musician Sven Grünberg. The Talinn resident had previously led prog outfit Mess, who were active in the late 1970s but, due to Soviet censure, forbidden from actually releasing any recordings until many years later. Mess’ music isn’t messy, per se, but it is haphazardly structured and full of proggier-than-though flights of fancy. Hingus, though, is very different – an album of ecstatic cosmic dazzle.

Played on bespoke synthesisers (built by Mess member Härmo Härm), Hingus trades mostly in mock-orchestral swells in a ‘Trans Europe Express’ mould, decorated with chimes and harmonics. Pretty ambient passages, reminiscent of Steve Hillage’s works for synthesizer, break up the bombast, but the sense of high drama rarely lets up. The album is effectively split down the middle: the A-side is a four-part suite, whereas the flip centres around a long-form piece, ‘Valgusxis’. It’s occasionally stern, but Grünberg plays with Riley-esque force and exuberance throughout.

Opener ‘Hingus I’ is typical: foghorn synths swell and dissipate; synth tones call and respond across the stereo spectrum; a motorik pulse gently patters away at the bottom of the mix. Even when played quietly, it feels loud. Despite Grünberg’s prog pedigree, there’s no need for your typical warlock-‘pon-hillock illustrated artwork – Hingus‘ music already conjures images of scuffling ice giants, of cosmic battles on impossible scales. (The celestial cover art, incidentally, is just perfect – although it takes some effort of will to put the Smash Mash aliens out of your head).

The second half lacks the wattage of the A-side, but it’s a welcome warm-down, and closes on a pretty Vangelis-a-like piece in waltz-time. These quiet moments are important. Grünberg is a committed Buddhist – he sits on the executive body of the Estonian Institute of Buddhism – and though the album’s title initially brings some cosmic Mongol warrior to mind, it’s actually the Estonian word for “breath”. For all the shock and awe, there’s a devotional quality running throughout Hingus that makes it all the more effective.

Grünberg would never make a record as strident as Hingus again: by 1988’s (admittedly lovely) OM, he’d committed himself wholeheartedly to discreet music for yurt-dwellers. He’s also been heavily involved in the Estonian film industry, soundtracking such no-me-neither treats as Fed Up! and Lotte From Gadgetville. Hard to imagine any of his cinema work matching Hingus‘ blockbuster feel, though; fans of Hudson Mohawke’s shinier moments or Symmetry’s blinking cityscapes are advised to check it out stet. A classic piece of Soviet-era electronics, immaculate however you happen to discover it.