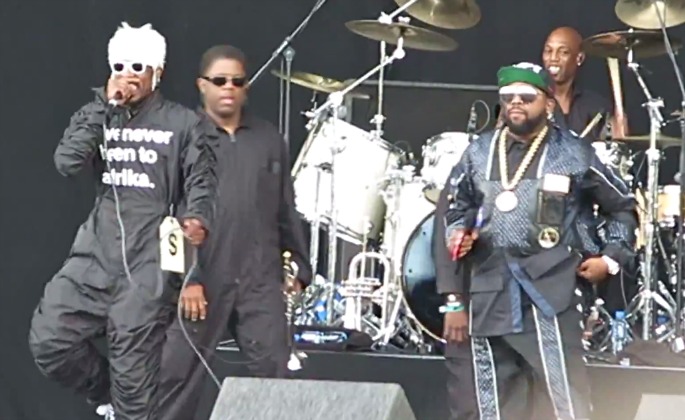 ATLiens touch down in London and Birmingham as part of their 20th anniversary tour.

OutKast performed two nights at Wireless Festival this weekend, trawling through their sizeable back catalogue for a hit-laden set including ‘Ms. Jackson’, ‘B.O.B.’ and ‘Hey Ya!’ as well as some deeper cuts like ‘Skew It On The Bar-B’ and ‘Da Art of Storytellin Part 1’ from 1998’s Aquemini and ‘Elevators (Me and You)’ from 1996’s ATLiens.

Both Andre 3000 and Big Boi performed short solo sets during the London performance, with Sleepy Brown joining Big Boi for ‘The Way You Move’ and a bunch of dancers – including two members of X-Factor girl group Little Mix – appearing with Andre 3000 for ‘Hey Ya’.  Andre wore a grey wig and a black jumpsuit emblazoned with the words, “I’ve never been to Afrika”. As he’s been doing on this reunion tour so far, he also had a price tag attached to him with the word “sold” written on it.

See the setlist below and check out some fan-shot footage of ‘Da Art of Storytellin’ Part 1′, ‘Gasoline Dreams’, ‘Prototype’ and ‘Skew It on the Bar-B’.

Kanye West headlined both the Friday and Saturday nights at the London leg of the festival after Drake cancelled his headline slot at the last minute. Yeezy’s signature mid-set rant – which this time topped out at over 20 minutes – was met with boos from the crowd.