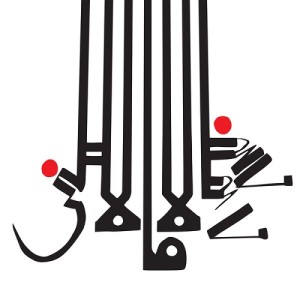 The story of leftfield hip-hop is as shambolic as the records the term covers. But if the history of rap to the left of the mainstream is tricky, any enthusiast will tell you that Shabazz Palaces, the group comprised of core members Tendai Mariare and Ishmael Butler aka Palaceer Lazaro, formerly of Digable Planets, are among its contemporary leading lights. It’s telling of both Shabazz Palaces’ influence and catholic approach that not only are they signed to Sub Pop, a label more commonly associated with indie rock than rap, but also that Butler was recently appointed one of the label’s A&Rs.

In an interview on his new role, Butler outlined his ambition to sign “imaginative artists, daring artists, courageous artists, independent-thinking artists, artists that aren’t relying on trends or superficial things to get noticed.” It’s unsurprising, then, that Shabazz Palaces’ own music fits nicely under this rubric. Lese Majesty builds on the group’s 2011 debut LP Black Up, a deeply singular mélange of psychedelic beats and Afrofuturist lyrics, to reach new heights of brilliant weirdness.

Despite its 18-track length, snaking song structures and Palaceer’s opaque lyricism, Lese Majesty never feels too long or difficult to unpack. This is largely thanks to the record’s sequencing into seven “suites”, such as ‘Palace War Council Meeting’, made up of ‘Soundview’, ‘Ishmael’ and ‘Down 155th in the MCM Snorkel’ and held together with swampy production and moody basslines.

The beats are never quite what they seem, with tracks meandering into unexpected places. A raw funk bassline on ‘The Ballad of Lt. Maj. Winnings’ melts away into a sparse rhythm dotted with squelching accents, while the vocal stabs and slapping drum hits on ‘They Come In Gold’ disperse into an amorphous cloud, with Palaceer’s double-tracked, nasal flow rising above the noodling.

Tracks often wander on their own inscrutable trajectory, like the abstracted instrumental ‘Divine of Form’ or the smoked-out beat of ‘Ishmael’, where Palaceer’s loping cadence segues into a heavily muffled murmur and the beat becomes little more than a handful of bleeps and chimes echoing in space. It’s all a good deal less hard-hitting that Black Up’s trippy boom-bap, and in its way more inviting despite being superficially less accessible.

Palaceer’s penchant for rapping seemingly just for the sheer fun of it – see “I make ’em dance just at a glance / I’m very nice like Jerry Rice” on ‘Solemn Swears’ – may initially disappoint fans of Black Up’s pointedly political songs like ‘Swerve… The Reeping Of All That Is Worthwhile (Noir Not Withstanding)’. But for every “I’m coming up like Donald Duck” there are lines like “I’m having my cake and I’m eating cake” (‘#CAKE’), or “We’re throwing cocktails at the Führer / Blackness is abstracted and protracted by the purest” (‘Dawn In Luxor’) that counterpoint any silliness while avoiding the tedious smugness often associated with so-called conscious rap. Shabazz Palaces deserve credit where it’s due for building their sound outward; if Black Up established their status as hip-hop outliers, then Lese Majesty solidifies their place in the pantheon of rap’s oddball geniuses. Long may they reign.