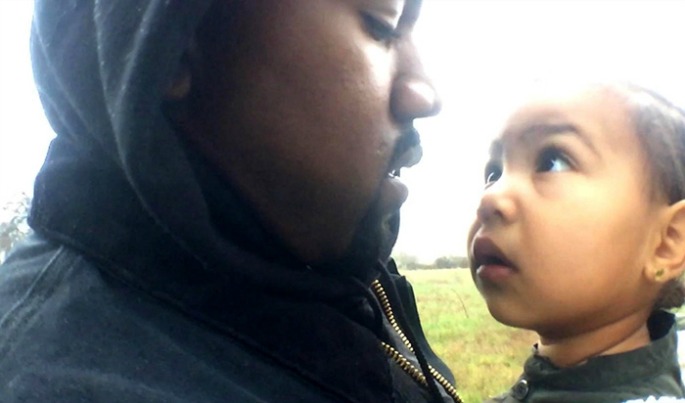 Update: The full version of the video is now on Kanye’s site.

Kanye West has previewed a video for ‘Only One’, his collaboration with Paul McCartney written for his kid North, on The Ellen DeGeneres Show. The ultra-low-budget, lo-fi vid is directed by Spike Jonze and features dad and baby doing absolutely nothing on a foggy track. It’s cute.

He also chatted to Ellen about marriage and fatherhood, saying: “I think I’m a better human being because of her [Kim Kardashian] and because of my daughter, and I have always someone to think about going home to: something for me to not only to be brave for what I want to do for humanity, but also to be more protective of myself for my family, because there’s things I’ve done in the past that were considered negative, but I was really jumping in front of the tank for other people, or for culture, in a way. So now, I always have to have that in my mind that I have a family that I have to protect, too.”

He also talked about his new sound, as heard on ‘Only One’ and the newer collaboration with Macca and Rihanna, ‘Fourfiveseconds’: “The definition of crazy is trying to do the same thing and expecting different results – so I tried something different over the past couple years, and I actually got some good results from it too”.

The new album is still without a title. “We’re still trying to find the vibe,” he explained. “[There’s] this transition from what I felt when I did Yeezus to what I feel now and we’re just creating, so we haven’t found it yet.” [via Rap-Up; Pitchfork]