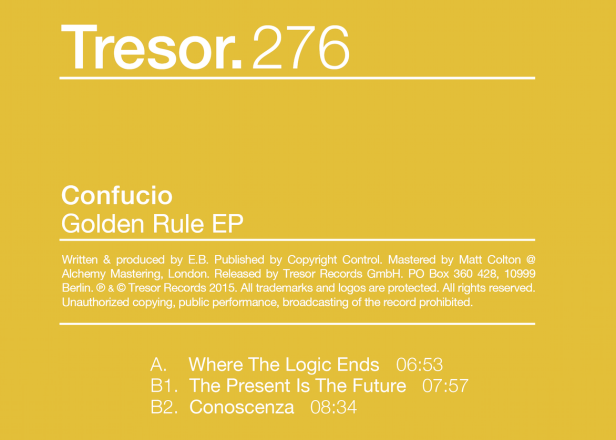 The Berlin label is recalling the EP after listeners pointed out similarities to other tracks.

Tresor has deleted Confucio’s (a.k.a ARTS label boss Emmanuel) Golden Rule EP after it was found to plagiarise material by other producers.

Russian techno artist Dasha Rush pointed out the similarities between the Italian producer’s ‘Where The Logic Ends’ and Stanislav Tolkachev’s 2006 track ‘Blue Mood’, while another track on the EP, ‘The Present Is The Future’, was found to be similar to Alexey Volkov’s ‘Self Control’ from 2011. The EP was streaming on FACT last week.

As RA reports, Tresor at first negotiated with the labels that released those records, Aftertaste Recordings and Planete Rouge, to give the original musicians all the proceeds from the sale of Golden Rule. The label then went a step further and decided to recall and delete every physical copy and remove it from release in digital stores. Confucio’s planned appearance at Tresor last Friday was cancelled too.

“The foundation of these tracks come from producers we regularly work with and truly respect. We would like to thank them publicly for all their support, understanding and assistance,” Tresor told RA.

“Sampling, remixing, reworking and re-editing are techniques that find themselves at the core of electronic music. With the perspective Tresor has acquired over the last 25 years, controversies of this nature have always existed around the technique and have both positively and negatively affected the industry. Unfortunately, these examples go beyond this and we apologise to our fans, supporters and the artists involved once more.”

Update: Emmanuel has defended himself on Facebook, making the following statement [all sic]:

“I will make a proper speach after this one, But first RA never asked me nothing. Second Tresor fixed the issue with the artists licensing what has to be licensed, third stanislav was aware of it, and he even liked the work i did on his track. I want to say a pubblic sorry for the big shitstorm i caused, But as You can see people think about rippoffs when my idea wasn’t stealing But celebrating. I didn’t even know about the sound that was coming from a2 since is a razor vst that everyone can do. Now the pubblic shitstorm power caused this gossip, and tresor has to protect the label somehow, and you can understand it. But this wasn’t my intensions. And if you are smart enough you know i don’t need to copy. Ah don’t forget, people love to speak knowing just one side of the medal. The sad part is the internet, where like a little dirty bar people like to cover other people with shit.”

He added: “It happend that tresor signed a record where i didn’t wanted the credit, we fixed the issue, But people called or rippoff when every thing is clear, if it was such a big problem it was more clear to delete the release. I never wanted the credit and i don’t want it.”

He’s also had “now known for having ripped-off some tracks from Stanislav Tolkachev and Alexey Volkov to get a release on the legendary Tresor Records” added to his Discogs page (probably a little harsh, given that he’s released around 20 things before this, but still).

Hear the source tracks below.