Earlier this week we celebrated hitting the midway point of 2015 with our Second Quarter Report, which highlighted 25 of our favorite albums of the last three months. Three of those albums were Bandcamp releases that had featured in this column, another reminder of how great the platform is for discovering music. June’s Release Of The Month didn’t make that cut simply because we weren’t aware of it in time, but trust me, you’ll be seeing it on plenty of lists come December.

Also in this month’s edition of Name Your Price we look at a punk band from Miami, a collection of surreal field recordings, a generous live archive from a band famous for their shows, and something I may already regret including by the time you read this. But first, let’s get to that Release Of The Month because it’s a doozy. 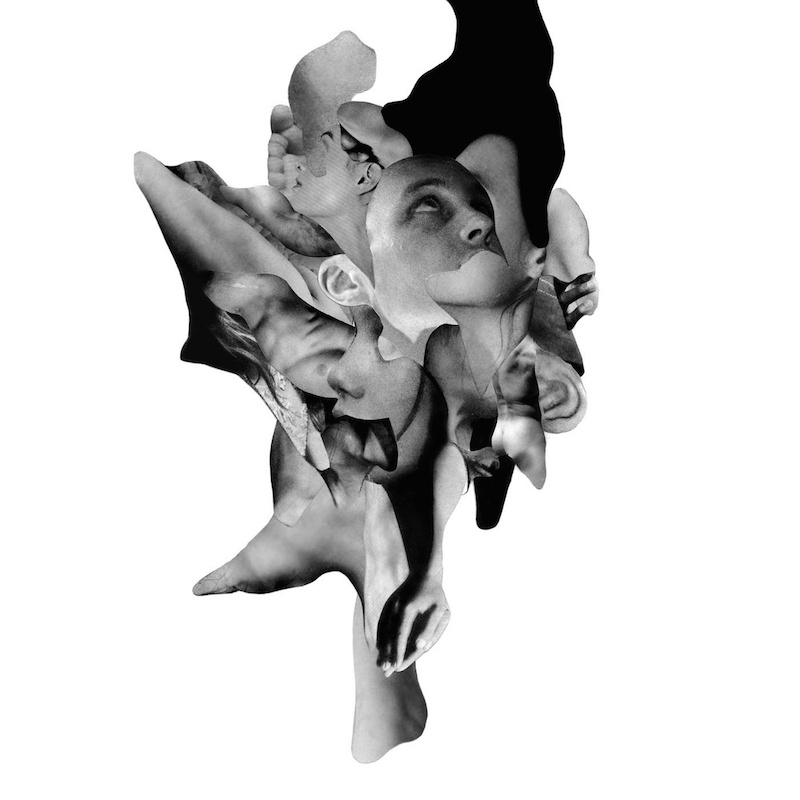 GUUD was self-released earlier this year but has been given a wider release by back-from-the-grave label Olde English Spelling Bee. Frankly, it deserves the second look because Tehran-born Ash Koosha has made something truly special.

Maybe it’s that OESB connection, but it’s hard to think of GUUD without recalling one of the label’s landmark releases — Forest Swords’ debut Dagger Paths (FACT’s 2010 album of the year). That murky, mysterious LP felt like an exorcism of the restless ghost of dubstep. Here, Koosha approaches a similarly bleak atmosphere in the wake of half a decade of binge-eating on maximalism.

The album’s moments of total sensory overload are many (see ‘Bo Bo Bones’ and ‘Tash Tack’ for two wildly different examples), but Koosha connects those bursts with sinewy contemplation. ‘Stain’ starts with vocals as manipulated and warped as something from PC Music, but works backwards from there to try and regain some faded sense of humanity. The mournful-but-glaring synths of ‘Mast’ stab through the foggy, humid atmosphere like Arca lost in a rainforest. Songs often shift gears without notice, as on the wondrous ‘SlamSlamSlam’, which hangs on a loop of a wheezing car engine before spindly synths twinkle down like hail.

Even as these melted songs are constantly evolving and transforming, each track is deftly mixed to flow into the next, keeping you disoriented and off-balance even as the record pulls you along. You won’t have any clue where Koosha is taking you, but rest assured he wants you along for the entire ride.

When we finally do reach the end it’s with ‘Harbour’, a sluggish, thumping track which evokes Koosha’s Iranian roots in its gradually introduced melody. But it’s right in the album’s final 30 seconds, when he’s aware that the groove is starting to hypnotize you, that everything explodes into a blitz of shrieking synths and gravity-defying throbs. The final note blares out like the jump sound in a glitching video game, but the record ends in mid-air. Who knows where or when Koosha will land, but after GUUD we’ll be watching. 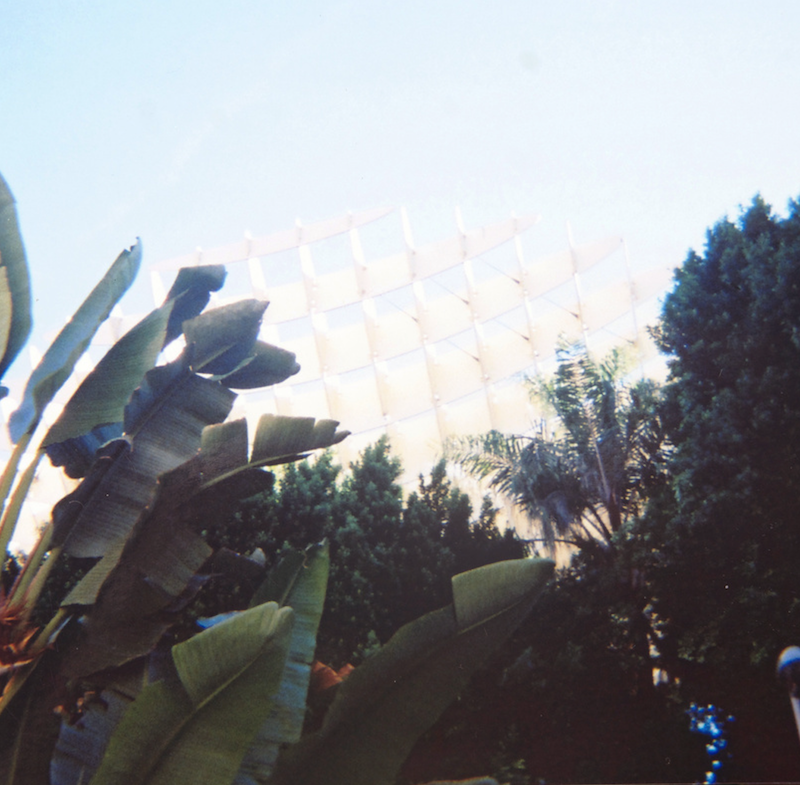 Dolphins Into The Future
Songs Of Gold, Incandescent

One of the go-to visual art analogies when describing ambient music is abstract expressionism. Dolphins Into The Future’s surreal field recordings and hyperspecific soundscapes come off more like faded nature photography. It’s music that sounds the way old copies of National Geographic smell, and it makes Songs of Gold, Incandescent an intoxicating travelogue.

On one level Songs Of Gold is a cleaning-out-the-house release while Lieven Martens Moana preps his new Dolphins LP for later this year, but the odds-and-ends quality also gives it a wonderful globe-trotting atmosphere; we’re taken to Hawaii, islands off the coast of Italy, the streets of Paris, and a beach in Portugal. Whether it’s present day, like the displaced Bora Bora singers in Paris on ‘A Himene Tarava For Paul Gauguin’, or the prehistoric humidity on ‘Lava’, these abstract memories become implanted in your brain Total Recall-style.

Though the transformative visuals of a Dolphins live show aren’t available here, Moana includes written notes for each piece that provide insights, context and wryly funny observations. Read them as you play it and you get a unique listening experience by one of the most original sound artists working today. 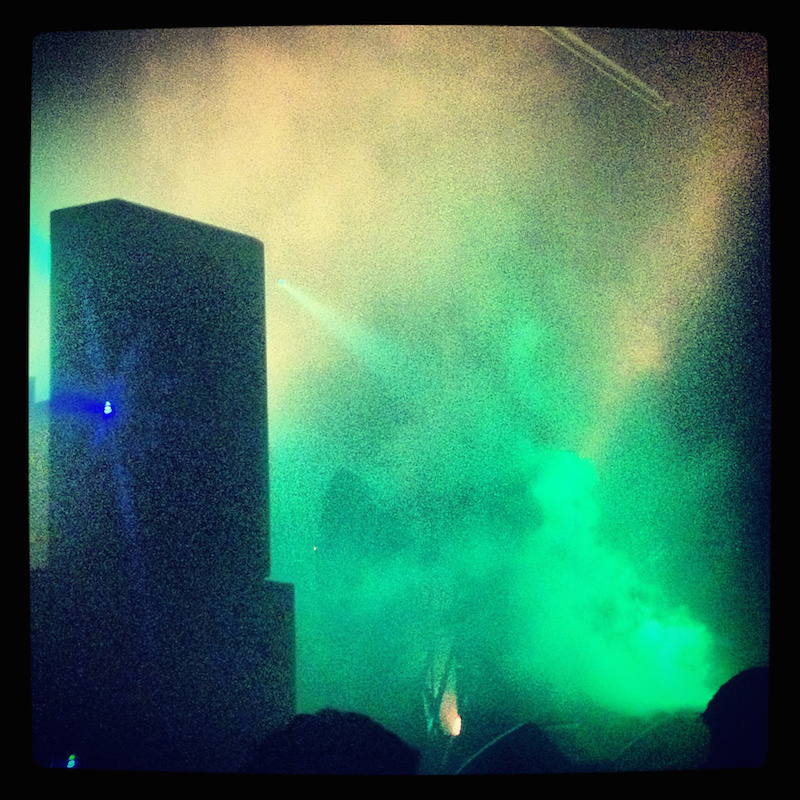 The first music festival I covered in a “professional” context was 2012’s Hopscotch Festival and one of the most memorable moments during that was being glued to my seat in Memorial Hall watching a late night performance by Sunn O))). As often as metal gets tied to religious and satanic imagery this show was pure sci-fi. Drowned in smoke and green light it looked like a meteorite had crashed on stage and unleashed these wine-swilling monsters from another dimension. It was a total thrill, and it’s just one of the 76 concerts the band made available on Bandcamp this month.

While I’m not going to pretend to have listened to every single one of the roughly 100 hours of music capturing over a decade of this band’s live shows, I had a hell of a time browsing through and hearing them evolve over that time. I suggest you do the same. 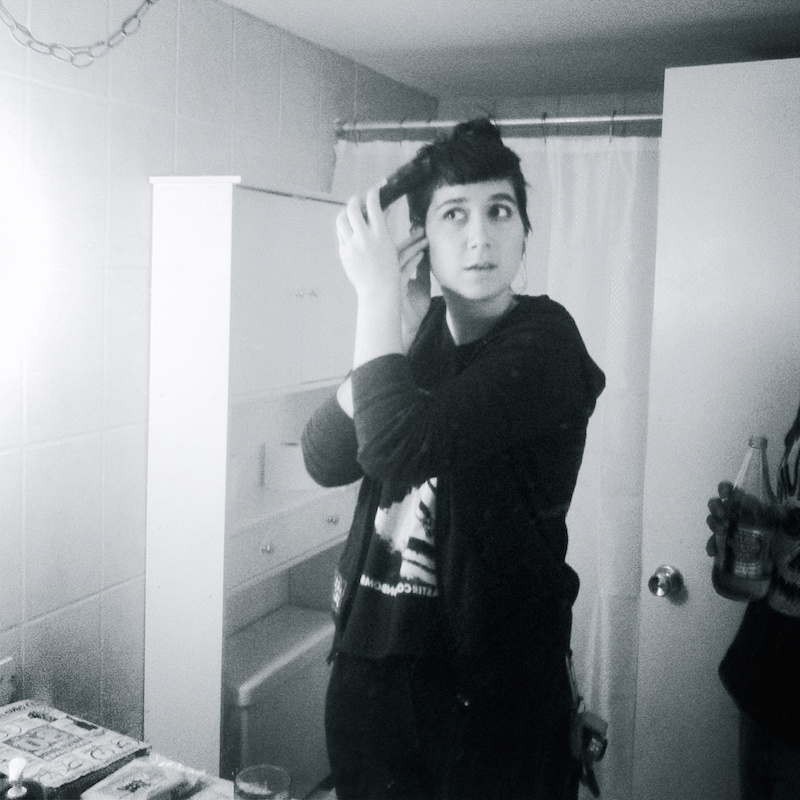 It’s tough to find information on Smut, at least the Miami-based Smut that put out this EP, which burns bright and quick like sparklers on a summer day. Four tracks of fuzzy, heartfelt punk and a welcome Black Tambourine cover is all we get, but like any good punk band Smut deliver a lot in a small dose. The best thing here might be the opening ‘Cold’ not just for its glowing earworm hooks, but for the lyrical rewards you find after sifting through the haze. The melodic chant ‘Cold hearted, cold/ I’m all alone, and I’ll probably die like this’ is the sort of honestly relatable fear that’s elevated to an inspired cheer by the end. She has another band too, apparently — here’s hoping we learn a lot more about both soon. 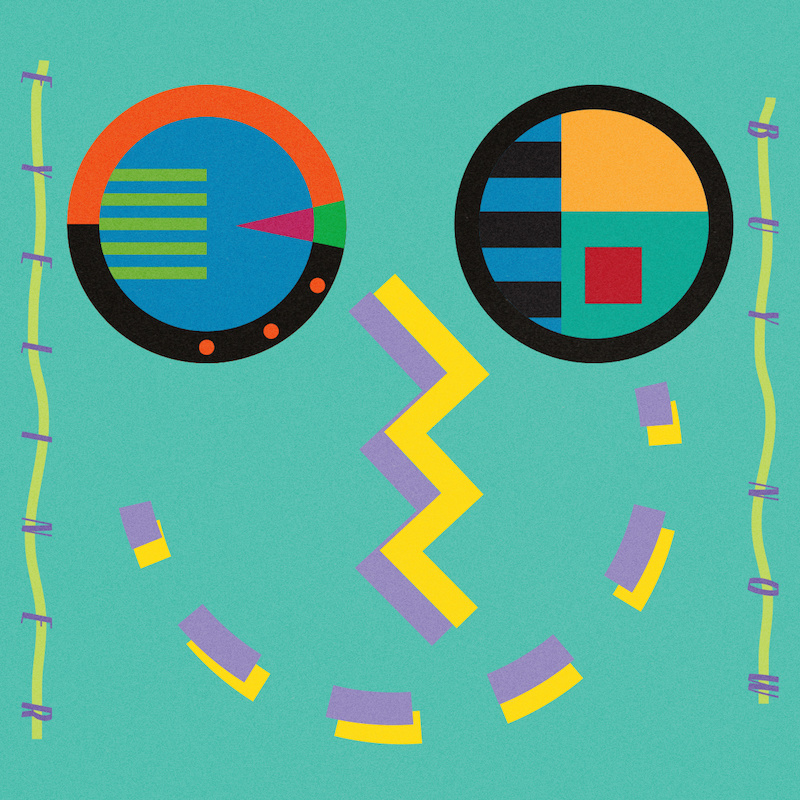 Eyeliner utilizes echoing bombast and synthesized bass slaps throughout a lot of BUYNOW, but surprisingly never sounds tied down by the past. It’s clear from the opener ‘Toy Dog’ this producer has a knack for spinning those dated elements into welcomingly spacey funk, but it’s when things speed up that lift off is achieved. ‘Pinot Noir’’s luxurious vibe is only topped by the the dazzling one-two punch of ‘Venetian Blind’ and ‘Showbiz’. The latter of those glides in on an already entrancing groove and just builds and builds in ways you wouldn’t expect. Beer On The Rug have been having an amazing 2015 already with releases like Euglossine’s Complex Playground, and Eyeliner (and their other great June release by Seabat) are only making it better. 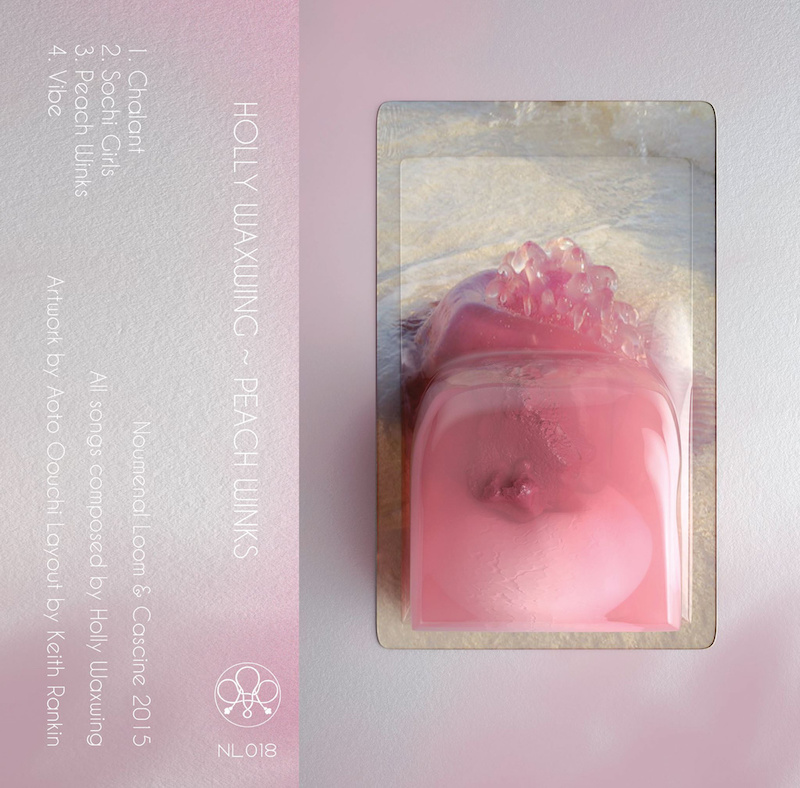 It’s been easy to dread the waves of PC Music soundalikes, but Alabama artist Holly Waxwing’s delightful little Peach Winks EP is an important reminder that great things will always influence more great things. From the title to the gooey artwork to the four supercharged songs inside, Waxwing’s EP is a nourishing piece of candy. Productions like the title track and the delightful closer ‘Vibe’ let voices and beats bounce and bang with the unpredictability of a pinball table that’s just activated its multiball. It’s also not a debut, though it will act as one for the new fans. As a bonus Noumenal Loom has wisely reissued Holly Waxwing’s 2013 album Goldleaf Acrobatics, which shows how the talent that was already brewing before you knew ‘Bipp’ was a thing. 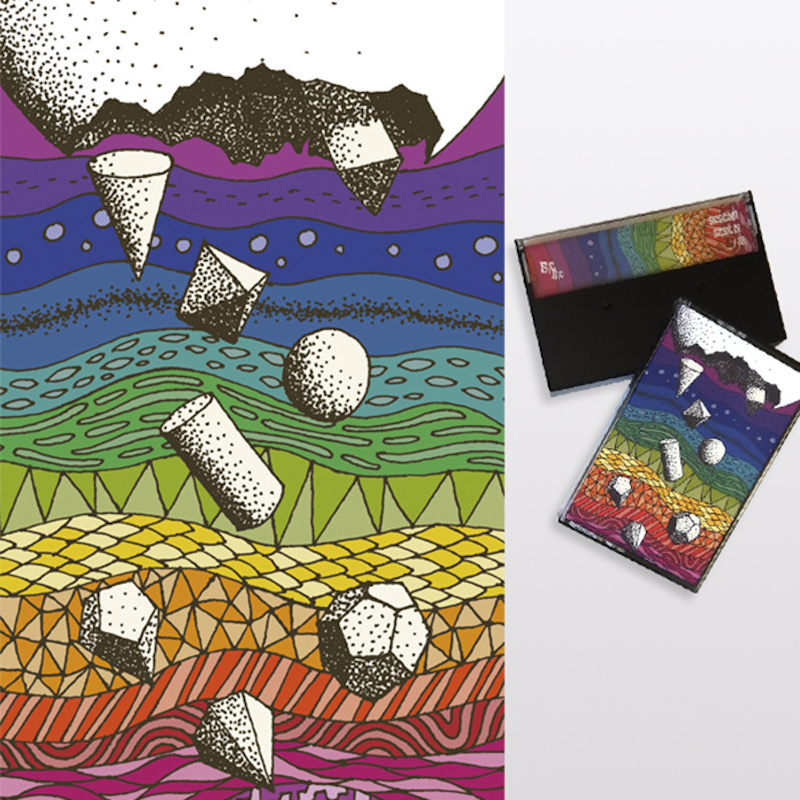 Talk West describe their new release Blindsight as a “soundtrack to a recurring dream” and totally earns the description. Aside from two bookending standalone tracks, the rest of Blindsight is dedicated to a single song suite. Titled ‘That Dream Again’, it stumbles in at ‘Part 2’ and follows a slippery non-logic until finishing at ‘Part 10’ with little closure — what dreams do after all? It makes for a neat concept, but also gives Talk West an excuse to change up styles with little commitment to what came before. The sun-drenched organ hum of ‘Part 4’ only lasts half a minute before the watery percussion of ‘Part 5’ leaks through, followed by a grim guitar meditation in ‘Part 6’, and so on. It makes for a dynamic listen and one that benefits from multiple trips; after all, there’s a reason it’s the soundtrack to a recurring dream. 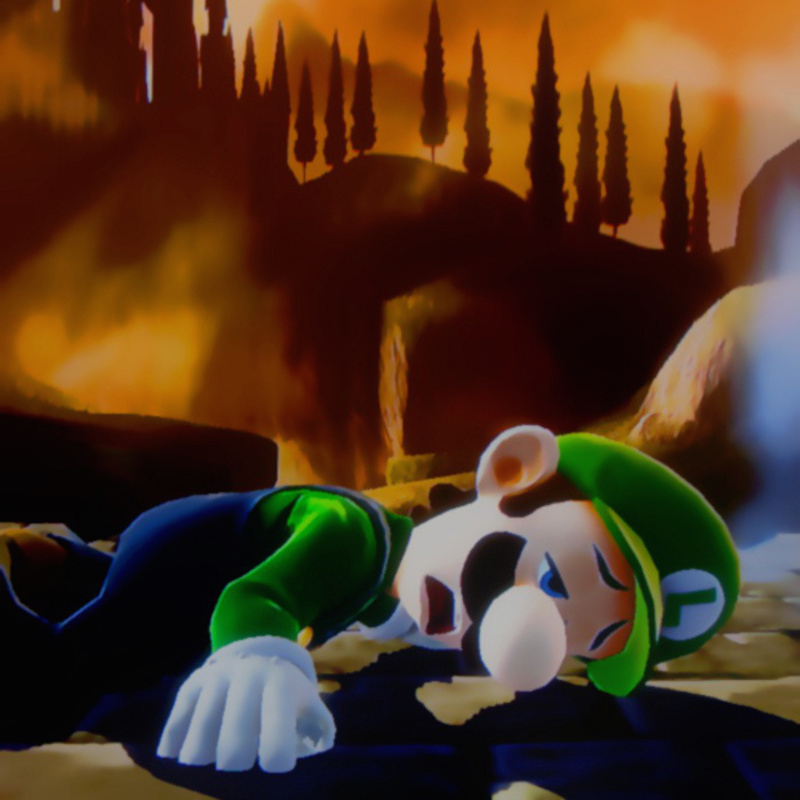 Picture the unstable romantic obsession and violent fantasies of early Tyler, the Creator.

Okay, now picture all of that focused on Mario’s unlucky brother Luigi.

You know, each month I really try to reserve an honorary spot for the most baffling, bizarre, and memorably fucked-up release of the month. This is the first time I really worried whether I was going too far.