This week, Apple finally took its first steps into the online streaming business.

Despite the launch of Apple Music being dogged with controversy, I had hope that it would win me over in the way that Spotify hasn’t. The company has spent decades making the process of interacting with technology as simple as possible, yet Apple Music is hampered by a clunky interface, and lacks true innovation thanks to an algorithm that still has a lot to learn.

Disappointingly the first thing that confronts you when you sign up for Apple Music’s free trial is a screen of pink bubbles with vague genre categories, asking you to “tell us what you like”. It’s a frustrating first impression.

In 2015, that question is difficult to answer. People have access to so much music now, they probably like a bit of everything. Genre categories are more varied than ever, and a mini-game that asks you to decide whether you enjoy the broad category of 90s music isn’t fun – it’s a chore. Even still, I popped those bubbles and tapped on the artists I liked, hoping not to like anything that might skew my experience towards one genre or the other.

Three days into my trial, and I still have no idea what this process has done to shape my Apple Music experience. I’m worried I’ve made the wrong choices, like I’ve picked a bad starting class in an RPG and I’ll be forced to spend the rest of the game fending off unwanted Coldplay recommendations with a plank shield. Trent Reznor, who has worked extensively behind the scenes on the service, has spoken of wanting Apple Music to “feel like walking into an independent record shop,” but the overriding experience of Apple Music is more or less the same as that of Spotify – albeit with more vivid colours and editorial content that’s somewhere between your average broadsheet and Amazon’s recommendations. It works fine. It recommends albums to me I haven’t heard that seem relevant. It knows this because it’s harvested all the data from an iTunes library that’s taken years to build. Still, something feels a little off about the whole thing.

It’s a shame, because when you dig around, Apple Music has some genuinely interesting content – playlists compiled by humans for example. I found the “Intro to Mika Vainio” playlist I’ve wanted for years, a selection of “Arthur Russell: Deep Cuts” and a “Best of Orange Milk” playlist, each of which are great. It’s genuinely surprising that Apple has catered for experimental fans in such an informed way. It’s just frustrating that these haven’t floated to the top layer for me. Instead, Apple Music is giving me things I’ve already heard in the “For You” section, a major failing for a service that has sold itself on musical discovery.

Another feature Apple has included to help make streaming a more personalised experience is Connect. A way for artists to talk to and share music, photos and video with their fans, it’s a good concept. It certainly helps Apple Music feel less like a storefront, but despite the service automatically following all artists in my iTunes library, the amount of content I’ve seen so far has been meagre. Drake for example, who appeared on stage to help launch Apple Music at the WWDC, hasn’t used it at all. It’s currently quieter at Connect than it is over at Ello, which doesn’t bode well for the future of the service. 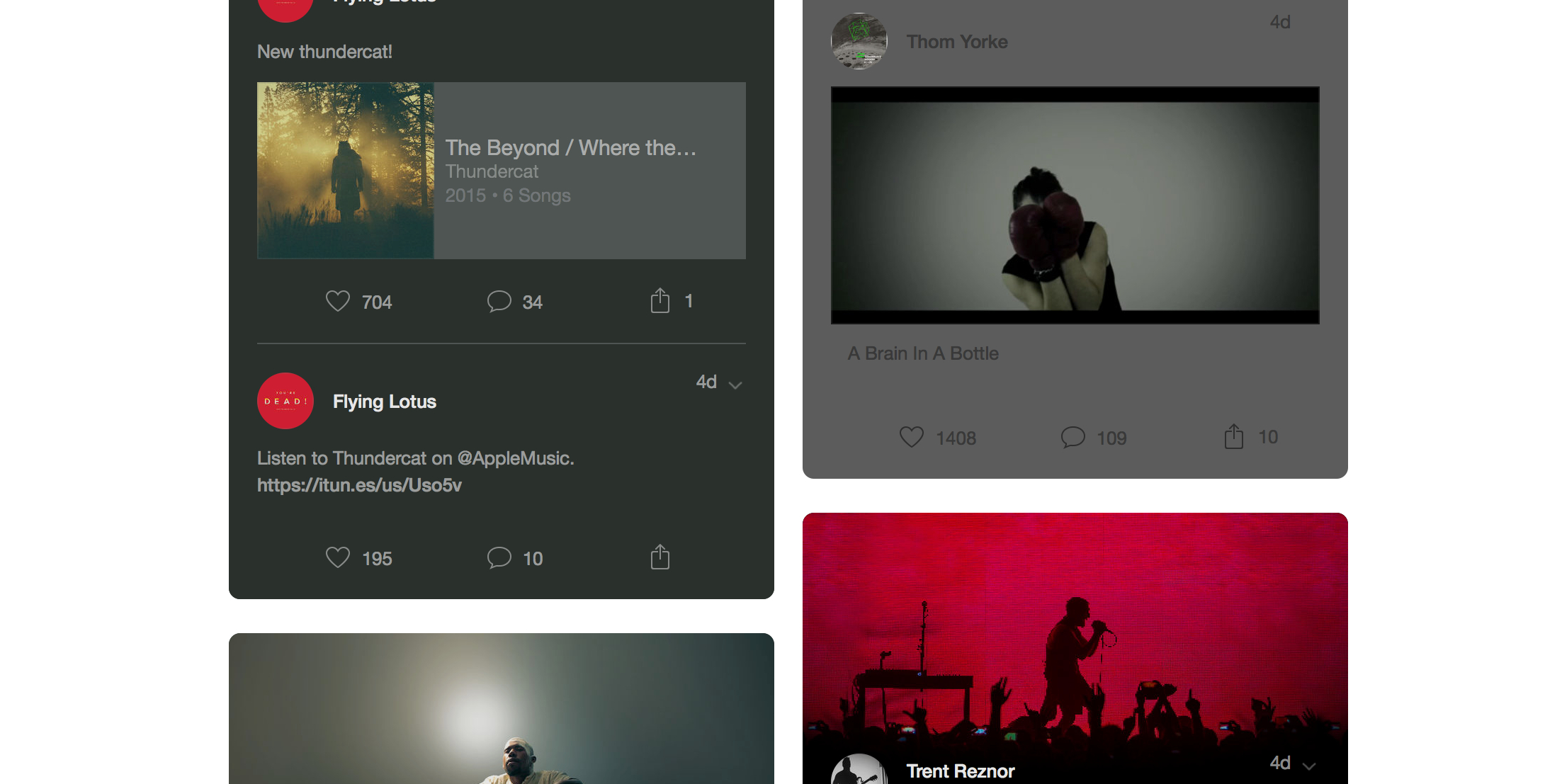 It’s currently quieter at Connect than it is over at Ello, which doesn’t bode well for the future of the service

It could be because it’s currently about as much use as sticking a card in a (admittedly very well viewed) shop window. As Create Digital Music’s Peter Kirn has noted, the only way for artists to upload content is via an iOS device, and there’s no statistical information for artists on who and how many people are following them – vastly inferior to what Spotify, SoundCloud and YouTube offer. If you’re a major label artist with a social media team maintaining your presence then it’s just a bit of brand reinforcement. For independent artists, it just doesn’t seem to be worth the time, especially when Spotify and Tidal let you sell tickets and merchandise too.

Apple Music’s 24-hour, global radio station Beats 1 is a similarly mixed experience. At times you could swear you’re listening to BBC Radio 1, and often it’s better. Out of the three anchors, Julie Adenuga’s show is a highlight, elevated by her obvious passion and knowledge of emerging music. The manner in which she championed new British music from the UK’s grime and dance scenes on her debut was a stark contrast to the set of legacy hip-hop Ebro Darden played in his first 30 minutes.

The ratio of independent music played is certainly higher than you’d expect from a commercial station, but it still falls short of the “independent record store” feel Trent Reznor wants to achieve. The reason for this isn’t necessarily because the presenters aren’t engaged or knowledgable enough – far from it – but because the overall effect is so geographically disjointed, moving from filler shows that sound like local US radio to those presented by Disclosure or Run The Jewels. Beats 1 is obviously trying to ape the community feel of internet stations like NTS and BCR, but by switching location so much the impression it leaves is more like in-flight radio with only one channel. 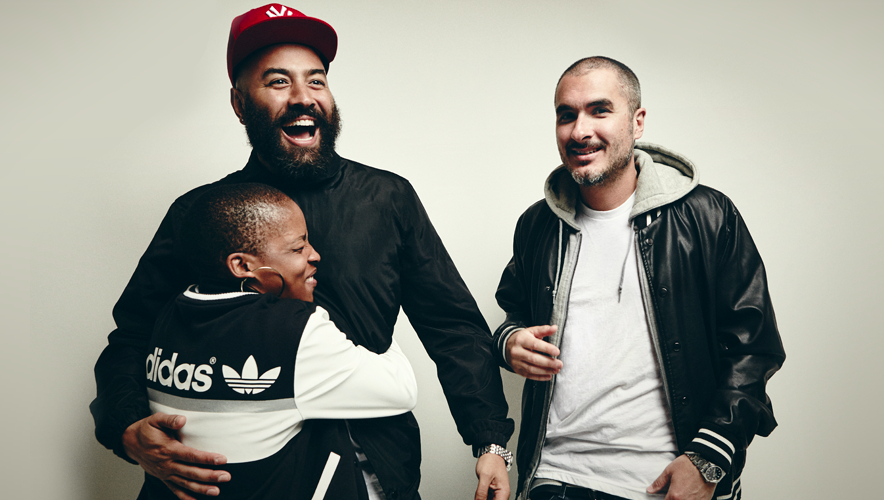 The ratio of independent music is higher than you’d expect from a commercial station, but it still falls short of the “independent record store” feel Trent Reznor wants to achieve

This hermetically-sealed experience is something that’s been common to Apple’s hardware for years. If your iPhone or Macbook Pro needs a new battery, Apple has to open it up for you and install it, and Apple Music is no different. If you’re an artist, you can speak to your fans but not much else; if you’re a user, there’s no way to make collaborative playlists like you can on Spotify. The social experience, one of the most important aspects of any online business, is either absent, or blocked off. You can share a playlist via Twitter, Facebook or direct link, but that’s nowhere near sophisticated enough.

Talking to Pitchfork about the way he saw Apple’s streaming competitors recently, Trent Reznor said the experience was akin to “walking into a big box store where all the merchandise is in a cardboard box.” When people use Apple Music or Beats 1, he wants people to “leave kind of blown away by the stuff you didn’t realize you wanted when you went in there.” Apple Music could certainly be that in the future; it has the content, and you can feel that human touch somewhere behind the scenes. In future versions, it will almost certainly be a more intuitive experience. But at the moment it’s trapped behind a confusing interface and an algorithm that just reflects your tastes back at you. Reznor might have taken that merchandise out of the box, but right now it feels like it’s behind a display, and we’re looking at it with our noses pressed up to the glass.