Straight Outta Compton, a forthcoming biopic about the formative L.A. rap group N.W.A., is layered with the message of self-preservation — and is becoming increasingly more timely within pop culture the closer it gets to its US release date on August 14.

Comprised of Ice Cube, Dr. Dre, Eazy-E, MC Ren and DJ Yella, the “reality rap” technicians — the term was theirs; it was often called “gangster rap” by the media, which, historically, stuck — built a new tentpole in the genre, highlighting the truths of their own lives through narratives about guns, drugs and unwarranted police brutality.

The film, helmed by legendary music video director F. Gary Gray (also responsible for Friday, among many others), recounts a loose version of their origin story, from Dr. Dre and Ice Cube’s garage collaborations to the nightclubs where they first started, and how, with Eazy’s drug money and the popularity of his first single ‘Boyz N The Hood,’ he was able to co-found his label Ruthless Records with manager Jerry Heller, who had previously worked with artists like Styx, Black Sabbath and Crosby, Stills and Nash. For rap historians and West Coast hip-hop aficionados, the lore of N.W.A. is well-known, from the rise to prominence of their controversial, FBI-defamed ‘Fuck tha Police’ to the founding of Death Row Records with Suge Knight to Dr. Dre’s liberation movement with his own Aftermath label.

Even with that much information packed air-tight into two and a half hours, Compton is not perfect. Much of the narrative is tweaked for entertainment purposes and brutal stories like Dr. Dre’s misogyny-fueled assault of music journalist Dee Barnes have been omitted from script. One could argue that the preservation of N.W.A.’s legacy and creating a portal for younger rap fans to see into some of this crucial history of the genre is important — and this wouldn’t be wrong, but an awareness that this is a friendlier, so to speak, version of their story is important, too.

But aside from just crystallizing N.W.A.’s place in music history, there are story arcs within Compton that mirror life today, despite taking place well over two decades ago. Early into the film, Cube is confronted by the police for simply walking out of Dr. Dre’s house. In a year that is robust with music biopics (Love & Mercy) and documentaries (Amy, Montage of Heck), Compton, as well as the Nina Simone doc What Happened, Miss Simone?, both have a strong focus on America’s systemic racism and police brutality epidemic. N.W.A. being forcefully interrogated by the LAPD outside of their suburban recording studio was not, and still is not, an anomaly. Despite being used as a storytelling device to the lead to the creation of ‘Fuck Tha Police’, this is a persistent reality in America. And it’s not just acted scenes of police violence. The film also includes real-life footage of the Rodney King beating and L.A. riots of 1993. Like Miss Simone’s catalogue of the March on Selma, this is a portrait of America that is still reflective of the 2010s, despite taking place decades earlier. These scenes are critical to N.W.A.’s history, but their refusal to use art as escapism, instead turning it into political critique, is only a part of their self-preservation.

Ice Cube, who produced the film and is played by his own son O’Shea Jackson Jr., arguably had the tightest grasp of this concept. His lyrics, even as a high schooler coming up in the rap-averse nightclubs where Dre DJed, were escapist spun-yarns about women and cars and about the racial profiling he experienced throughout his life. The creation of ‘Fuck Tha Police’ is portrayed in a condensed fashion — the lyrics crafted almost immediately after the group is abused by cops outside of the swanky suburban studio where their debut album was being recorded — but it’s the still-relevant content that acts as a capsule of his experience of being young and black. Cube was unafraid to shirk money from Ruthless and leave the group in favor of fair representation, even if he was taking on the lion’s share of the lyrical work. 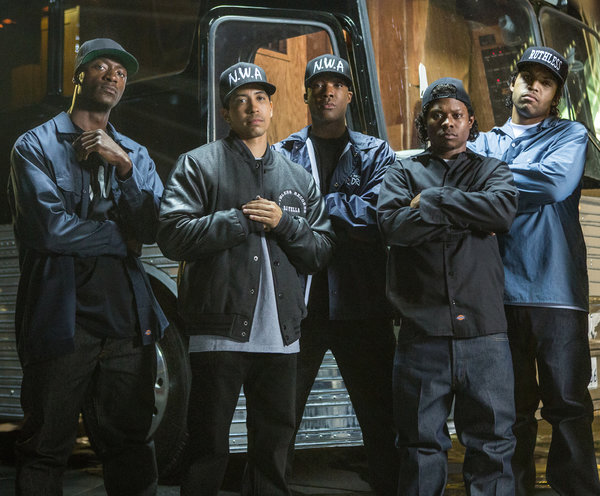 ‘No Vaseline’ is a reminder that these things are much more artistically serious than a slideshow of Twitter-mined memes.”

The film will land while we’re still in the midst, or at least in the dwindling down, of Drake and Meek Mill’s rap beef. If Meek’s supposed initial issue with Drake was that he submitted a ghostwritten verse for Meek’s ‘R.I.C.O.’, watching Ice Cube pen verses for groups Dre was trying to manufacture before passing them along to Eazy-E could, perhaps, nullify Meek’s argument. However, the beef that resulted from Cube’s split from N.W.A. will also shine a light on how these entanglements required a lot more fury than mere “no woman has ever had me starstruck” barbs. The making of Cube’s N.W.A. diss ‘No Vaseline’ is one of the film’s most exhilarating moments. It’s not just the pacing from when Cube hears the group call him Benedict Arnold to them hearing ‘Vaseline’ for the first time — when Jackson, Jr. spits, “Goddamn, I’m glad ya’ll set it off,” it’s a reminder that these things are much more artistically serious than a slideshow of Twitter-mined memes. And Jackson Jr.’s performance in this scene perfectly embodies his father’s spark.

The acting is another one of Compton’s bright spots. Music biopics always have some kind of awkward element to them. Notorious was crammed with misfired casting and some mediocre portrayals of the players, save Naturi Naughton’s brilliant Lil’ Kim. It is slightly jarring to watch Paul Giamatti play Jerry Heller amongst a group of unknown kids, but their performances stack up to his Oscar-nominated caliber of acting. Particularly impressive is New Orleans actor Jason Mitchell, who took on the daunting task of playing Eazy-E, but fully personified his slick, but ultimately, tragic reality.

E himself was on the other side of the self-preservation coin. If Cube’s consistent eye-on-the-prize was the peak, from abandoning being underpaid by Ruthless to finding other avenues to create, then Eazy-E was certain he would live forever, unscathed. Mitchell portrays E as an audacious businessman consumed by money, women and fame. While these are the real stories of two interconnected men’s lives, they respectively manifest what happens if you do or do not take care of yourself.

(This is not to leave out Dr. Dre, who is the most successful surviving member of N.W.A. and whose perseverance and triumphs are reported to us almost daily. The film portrays his alliance with Suge Knight to form Death Row Records and Dre’s business wit to get out of that messy, to put it lightly, deal when he needed more control. He was and is similarly-minded to Ice Cube, but is shown as much more low-key. And, yes, there are appearances from Snoop Dogg and 2Pac.)

With all of its aforementioned faults, as well as some way too on-the-nose dialogue and chronologically misplaced music, Straight Outta Compton is a true summer blockbuster. It is knee-slappingly funny, tugs at your heartstrings and the acting is meticulous. Despite its length, it moves quickly and keeps the viewer consistently engaged, but it’s not to be viewed for pure historical accuracy. (And, no doubt, there will be people who believe the entire thing to be constructed by Hollywood; these are the same people who were shocked when Ian Curtis hanged himself at the end of Control.) But it’s clear that the screenwriters, Ice Cube and Gray were intent to preserve N.W.A.’s legacy in the most favorable way possible. It’s another benchmark in Cube’s career-long history of self-preservation.