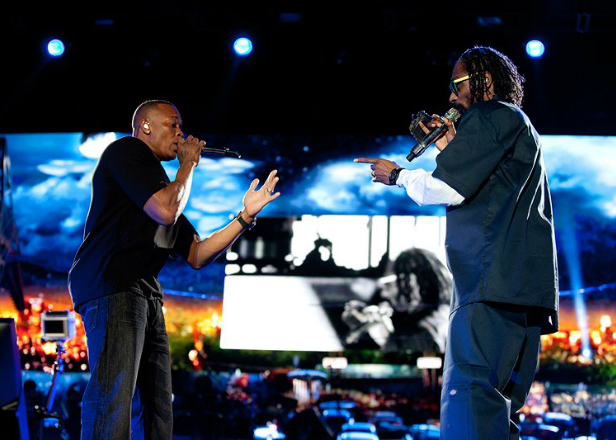 Snoop Dogg joined Dr. Dre on his Pharmacy radio show this week. The pair discussed a variety of topics during the in-depth conversation, looking back on classic collaborations like ‘Nuthin But A G Thang’ and ‘Deep Cover’. Conversation eventually turned to their 2012 Coachella performance, which starred a hologram 2pac.

“It’s just about having ideas, having great ideas. Not only having great ideas, but having these people that can execute these ideas,” Dre said of the hologram Tupac Shakur. Dr. Dre then revealed his ambition to tour Europe with three of his closest collaborators: Snoop, Eminem and Kendrick Lamar.

“One of my dreams right now is to be able to take my ideas and take a show over to Europe,” he said. “I’m 30 years in the game right now and I’ve never been able to take my full production over to Europe. Me and Snoop—we’ve been over there. Me and Eminem have been over there, but it’s just been like spot dates and like taking a microphone over there with a DJ. I never had the opportunity to take the full production over there, and take my full body of ideas over there and present it to all the people over there in Europe that’s been representing and showing me love throughout my entire 30-year career.”

“Your dream sounds like Woodstock on steroids,” said Snoop. “Let’s call it Hoodstock.” [via Complex]