Featured Stories I By Laurent FintoniI 14.10.15 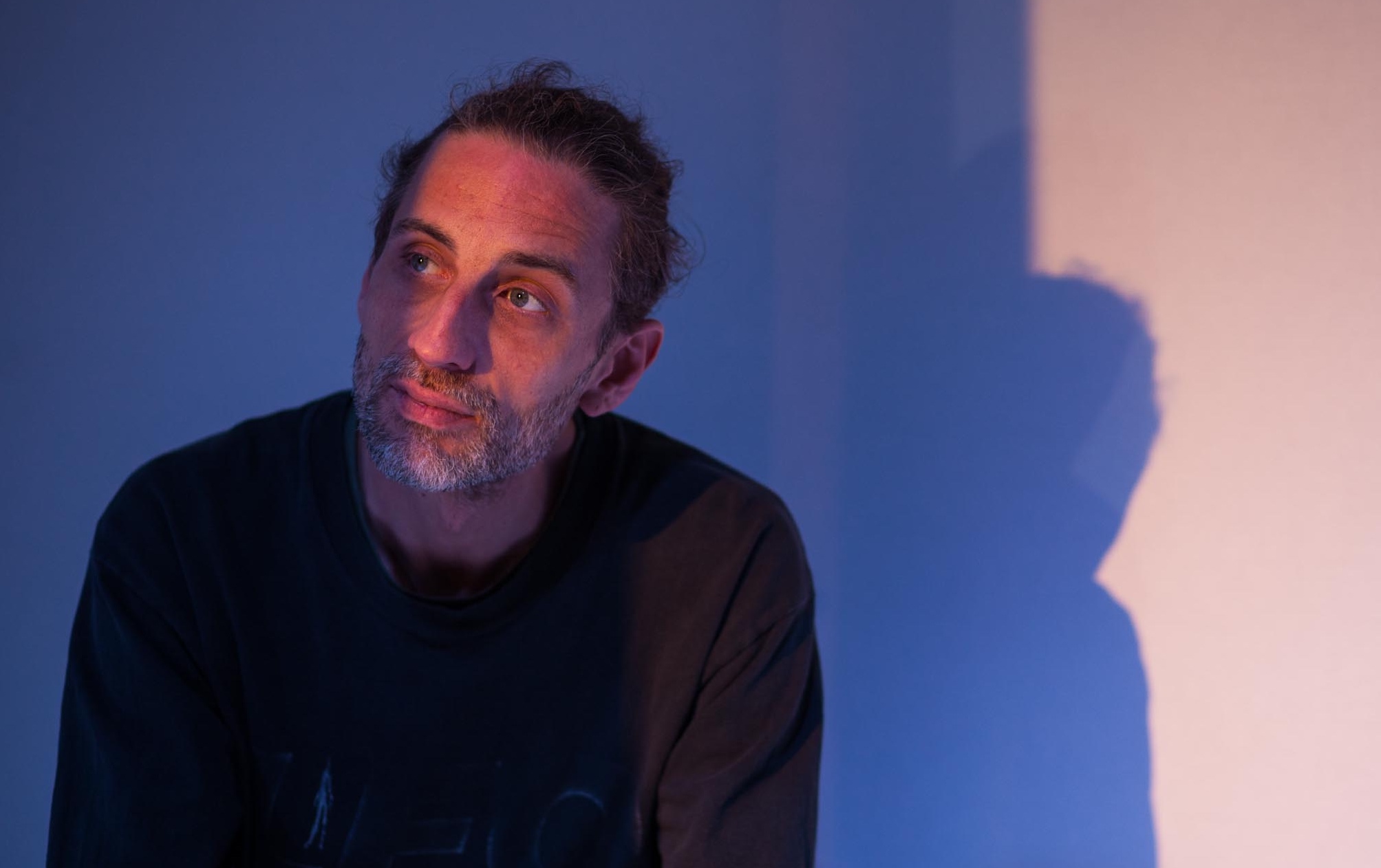 “I don’t know how I could make [new sounding music],” he told me a couple of years ago. “I’ve just got the same old shit I’ve had for years, plodding away at sequencing samples, not really knowing how the fuck else you can do it.”

Growing up in Cornwall, Vibert dropped out of school in December 1990 (“just before they kicked me out”) and got a job at a local record store. He pooled together equipment – a 4-track recorder, keyboard, drum machine and sampler – with his school friend Jeremy Simmonds and wrote his first album, Weirs, released in 1993 on the Rephlex label, though it was first slated as one of the label’s inaugural releases in 1991. Thus began a recording career that would see Vibert release some 20 albums, more than 50 EPs, and over 100 remixes under eight solo aliases and a handful of collaborations. Alongside Mark Pritchard and Richard D. James, two equally prolific, multi-monikered producers from the south-west of England, Vibert is responsible for a body of work that charts the British Isles’ singular relationship with electronic music.

In the early 1980s, Vibert and a friend were introduced to a compilation of electro tracks from the English label Street Sounds by an older kid who had moved down from London. “After that we were determined to become hip-hop kids,” he enthused. “We tried dancing but failed and so got more into the music.” Over the next decade Vibert would continue to indulge his love of hip-hop alongside flirtations with indie rock, the odd pop gem from Prince, and soon enough dance music. England in the late 1980s was a fertile ground for young artists to re-imagine American rap and electronic music imports, the latest twist in an ongoing transatlantic musical dialogue. “We’d mix fast rap with techno not even thinking about being eclectic or whatever,” says Vibert. “Just like, ‘Whoa, this new music is fucking great!'”

Following his first release on Rephlex, Vibert made a decision to eschew machines for samples. “We thought we couldn’t make hip-hop, being from Cornwall and aged 18, so we went with slowed down techno stuff,” he said of his early work with Simmonds. His 1994 debut release as Wagon Christ, Vibert’s most used alias aside from his birth name, was the result of a stylistic turnaround: “I thought, ‘Fuck it, I’m just going to use breakbeats.’ I couldn’t be bothered with all the drum machines and techno-y sounds anymore, and I used 90% samples.”

The Vibert sound was born in that decision. While he has remained attached to certain genres throughout his career — jungle, acid, instrumental hip-hop — sampling remains the binding element, a practice that is, at its core, genre agnostic. Vibert infuses his music with a sampledelia that plays out like a patchwork of recorded music history, oscillating between smooth jazz, vintage electronic bleeps, and sped-up breakbeats. His reliance on sampling was also practical, being suited to making music without vocalists. “Listening to so much hip-hop I think I found it hard at first with the instrumental stuff,” he said. “I’d pack it full of shit. Now I can do a bit less. There’s only 20 samples in tracks as opposed to 100 or something.”

Working with vocalists remains one of Vibert’s biggest wishes, one that has never fully materialised despite repeated attempts. He was responsible for the first two singles on Ninja Tune rap offshoot Big Dada in the late 1990s and even recorded an album with then-DJ Vadim collaborator Blu Rum 13 which never materialised. Later on, in the early 2010s, Warp gave some of his beats to grime MC JME, though nothing ever came of it. Remixes have been his sole opportunity to interact with vocals: “It feels like I don’t have so much to prove with the music when there’s a rap on top. When there’s no rap I think about filling the gaps, layering samples.”

Today, Vibert has relocated to the south of France with his family and continues to work with a handful of labels that have been a constant over the past 20 years, including Planet Mu and Ninja Tune. A quintessentially English artist, and someone who would rather let the work speak for itself, his music remains something of an acquired taste, a connoisseur’s choice for those who enjoy sample-heavy sonic rides. Despite this, he has made forays into the wider music world. He’s remixed the likes of Thurston Moore, contributed to a compilation for cult Japanese anime Cowboy Bebop, and more recently was responsible for one of the samples behind the Kanye West-produced ‘Numbers On The Boards’ by Pusha T — the production team stumbled across ‘Pots And Pans’ by Anthony King and John Matthews on Nuggets, a compilation of library music Vibert put together in 2001. Sampling is a funny business.

The following essential selection is just a dip in the Vibert ocean, somewhere between a list of favourites and a quick introduction to his constantly growing oeuvre. It’s a testament to the vibrancy of sampling as a practice at a time when clearing even the tiniest portion of a song has become difficult regardless of an artist’s status. Alongside personal choices are selections from a handful of Vibert’s close friends and collaborators, including Planet Mu founder Mike Paradinas, Hyperdub and Planet Mu officer Marcus Scott, designer Optigram, and New York producer FaltyDL.

Luke Vibert’s latest album, Bizarster, is out on October 16 via Planet Mu.

Read next: The 50 best trip-hop Albums of all time.

We start with a cut from the bonus EP to Vibert’s 1994 debut as Wagon Christ, Throbbing Pouch – seven minutes of chunky breaks, warm bass, and a melodic line that sounds like a malfunctioning modem connection. Vibert says he has always thought of his music as “more home listening” than club friendly. ‘Free Bass’ is a fitting example of how his approach to structure and sampling sat somewhere in between the club and the headphones, trapped in its own fantastic world.

Plug is an alias Vibert reserved for softer jungle and breakbeat explorations that wouldn’t be out of place in a rave chill-out room. There have only been two albums under the name so far, released 15 years apart. For FaltyDL, Vibert is “the devastating beat creator” of the song’s eponymous sample.

Luke Vibert
‘Get Your Head Down’
(From Flexistentialism, Ninja Tune, 1996)

The track that first introduced me to Vibert’s sound, taken from the Ninja Tune compilation Flexistentialism. Filters, Wu-Tang samples, and jazz drums: a summary of how producers outside of hip-hop’s mainstream chose to express their love and admiration for the music at the time.

On the subject of trip-hop, coined in 1994 and under which much of his 1990s output wound up being bundled, Vibert has a story: “Some time around 1989 I made a tape of instrumental hip-hop for a friend who had just moved to Wales. It was just the instrumental versions at that point, early Gangstarr things, maybe the odd DJ track, funky jazz stuff. And I called the tape ‘trip-hop’ as a joke. Not that it existed at the time – but then it was like, ‘Fuck, I made that up years ago!’”

Vibert’s first rap beat for Big Dada. “Will [Ashon] who ran the label didn’t know any producers, so he asked me for hip-hop tracks,” says Vibert. A menacing production that brings to mind a young El-P.

For many, the Mo’ Wax legacy remains centred around DJ Shadow’s debut, yet Vibert’s contribution to the label is one of its most singular albums. Big Soup is the soundtrack to a psychedelic space journey by Japanese businessmen and ‘M.A.R.S’ is its hypnotic anthem.

In 2003, Vibert released the YosepH album, a brilliant take on electro and acid, on Warp Records. ‘Slowfast’ is somewhere in between techno and drum & bass – the missing link between Bad Company and the slow/fast revival that has animated D&B over the past few years.

One hundred thousand and one ways to style. Choose one.

Despite a focus on jungle, hip-hop and acid, Vibert is also responsible for some splendid disco-soaked records as Kerrier District. This one is just the right side of dirty.

If there’s an American equivalent to Vibert it’s probably Michigan’s Osborne – a reclusive artist with a penchant for blinding electronic productions that capture the spirit of a genre with little regard for established tropes. The two came together on this remix for Ghostly offshoot Spectral Sound. It might be outta sight but you’ll feel it firmly in your chest.

We end with a track from Vibert’s first album for Planet Mu, 2007’s Chicago, Detroit, Redruth – named after the American homes of house and techno and a small town in Cornwall. ‘Breakbeat Metal Music’ is a mischievous love letter to the spiritual centres of dance music. It could probably have been a pop hit had it toned down its rugged edges. Any future historical axis of dance music will include Detroit, Chicago, and the south-west of England.