Björk’s new video is shot from inside her mouth

The latest Vulnicura video is directed by Jesse Kanda.

Kanda has come to prominence collaborating with Arca: he’s designed both of the Venezuelan artist’s album covers and shot his videos, and was also behind Twigs’ brilliant LP1 sleeve. The video for ‘Mouth Mantra’, which will soon be available in 360°, is filmed from inside Björk’s mouth.

In one of those all-lower-case-and-incredibly-earnest messages that Björk has accompanied everything with lately, she says: “i am so extremely grateful to jesse to be up for going on this journey …. it was brave of him to take it on and i feel spoiled having witnessed him grow, making hi tech mouth models and inventing cameras all to match a little therapeutic song about the throat. his dedication and devotion is overwhelming!!! i am especially grateful for those sassy dancefloor moments we managed to squeeze in there aswell: true magic!!”

In Kanda’s words, “If there’s one thing I’d like for people to take away from this video, it’s the power of vulnerability. That is what Björk’s album Vulnicura is all about to me, and hopefully this video reflects that. It’s about having the courage to express yourself and seeing yourself in that mirror. Doing something that scares the shit out of you and sharing it, growing from it, spreading love and courage to others and making the world a warmer place to be and relate to each other.”

Stream the video above, via Dazed. 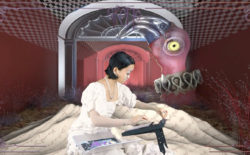