Kyle Hall and O B Ignitt guest on the 11-track LP.

Detroit producer Omar-S has confirmed details of his next album, set to be released on his FXHE label later this month.

As RA reports, The Best arrives on March 31 and sees the producer collaborate with fellow Detroit artists Norm Talley, O B Ignitt and Kyle Hall, as well as Bristol-based Tom Bugs.

The Best is another modestly titled album from the artist, who released an LP called It Can Be Done But Only I Can Do It. It’s his first since 2013’s Thank You For Letting Me Be Myself.

Juno Plus has been sent a “review” of the album from the producer attributed to O.G. Bobby Johnson, which reads:

“The Best Omar S, newest album simply reflects the singer, songwriter/producer’s brilliant career-always vogue, forever moving forward, yet transcending trend to find its place among the classics. The 11 selections gracing album, produced by Omar S is just what you never expect from a modern entertainment LEGEND!!!!”

You view see a snippet of the sleeve art below, but as Omar-S once famously said: “Only a momma’s boy cares about artwork!” 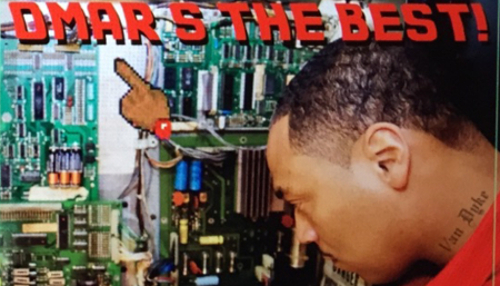