Kehlani is “healthy, home and with ppl who love me” following suicide attempt

Kehlani has shared an update with her fans following Monday night’s (March 28) suicide attempt which saw her hospitalised.

Reactivating her Instagram account, the R&B singer confirmed that she is “healthy, home, & with ppl who love me.” See a screen grab of the since-deleted post below. 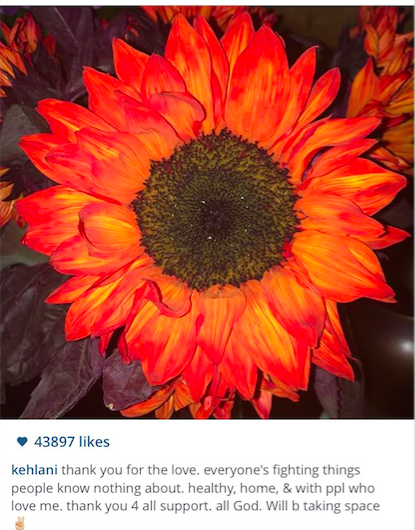 Kehlani, who recently appeared on ZAYN’s debut solo album, had removed her Instagram account on Monday after posting about her suicide attempt from a hospital bed. The attempt came after her ex-boyfriend Partynextdoor posted a photo of the pair in bed together, sparking internet rumours that she’d cheated on NBA star boyfriend Kyrie Irving.

Fans have since posted messages of support for the singer, with #StayStrongKehlani currently trending on Twitter and some of Kehlani’s famous fans also reaching out. The Roots’ Questlove wrote: “Heard about kehlani. one of the nicest people ever. i wish good energy and strength for her life.” US actress and singer JoJo meanwhile posted: “I love you Kehlani. You’re beautiful. Worthy of love and light and happiness.”

Nick Cannon visited Kehlani in hospital where he shared the following picture of her with his Instagram followers.

However, Chris Brown has taken aim at Kehlani via Twitter, claiming “there is no attempting suicide” and suggesting that the You Should Be Here singer was “doing shit for sympathy”.