Watch the Third Man team make history live by attempting to play to the first vinyl record in space.

Last year we called Jack White “Mr. Vinyl” but it looks like he really wants to be Captain.

Last week we reported that Jack White and his label Third Man Records had released a teaser video suggesting they wanted to be the first to play a vinyl record in space. Today they confirm that they will make an attempt to do so on July 30 to celebrate the label’s 7th anniversary.

The album will be a gold-plated master of Carl Sagan’s ‘A Glorious Dawn’, a spoken word collage of narration from Cosmos that Third Man originally released on 7″ in the first year of operation. This specific 12″ is also, according to the label, their three millionth pressed vinyl record.

They’ve detailed the turntable-cum-spacecraft on their site: “The vessel tasked with the mission —The ICARUS CRAFT — is a custom-built “space-proof” turntable attached to a high-altitude balloon designed by Kevin Carrico, who has NASA in his blood, and is responsible for assisting in the restoration of many of Third Man’s machines (Third Man Recording Booth) to working order. Kevin and the Third Man team are aided in their endeavor by SATINS (Students and Teachers in Near Space).” 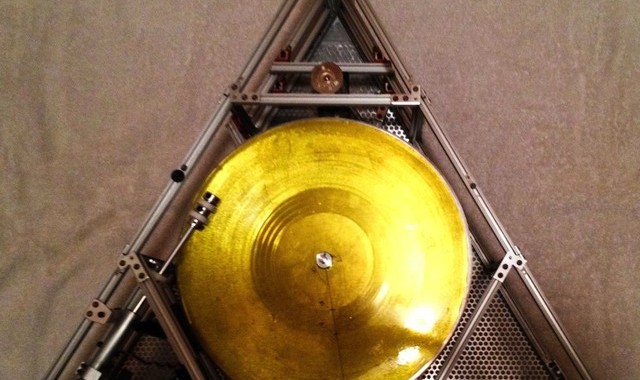 “Launch” parties will be at both the Detroit and Nashville brick and mortar Third Man outposts — although the actual space launch will be pre-recorded and streaming online, as well — where bands will perform live and they will be selling exclusive merch. The Icarus Craft will be on display in the Detroit shop, while the gold-plated album will be on view in Nashville.

More details and ticket info over at Third Man’s site. Wish them luck.