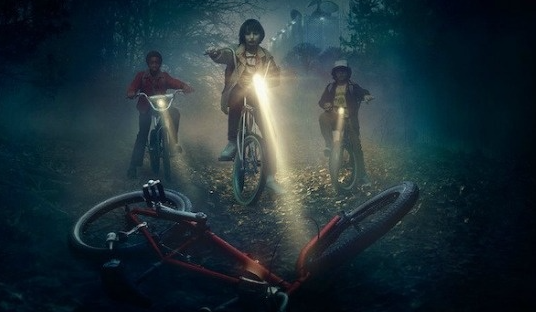 Coming to a students’ union near you.

Turntablist DJ Yoda has made a ‘tribute mix’ for one of the year’s best TV series, Stranger Things.

Imbuing Stranger Things’ woozy Carpenter-esque synth score with scratching and vocal samples taken from his Star Wars namesake, the mix threads together tracks featured in and inspired by the ‘80s-set show, including Toto’s ‘Africa’ and The Clash’s ‘Should I Stay Or Should I Go’.

Joy Division, Dolly Parton, Jefferson Airplane and Vangelis all make an appearance, along with Tangerine Dream’s retrowave touchstone ‘Beach Theme’ and a clutch of Carpenter soundtracks, including Escape From New York – all bona fide golden oldies. Listen to the mix below.

If the house party mood of DJ Yoda’s mix seems a little off, the eerie show’s synthesizer-led soundtrack by Austin band S U R V I V E is getting an official release soon. [Via The Vinyl Factory]