Fans rush to defend firefighter responsible for one of 2016’s most cult-acclaimed rap albums after “anti-cop” accusations.

The New York Post has been criticised for publishing a “disgusting” and “immoral” front page story about New York rapper Ka.

The article, which was published yesterday (August 21), tried to “out” Ka, born Kaseem Ryan, for living a “double life” as a firefighter, while criticising the Brooklyn-based artist for “bad-mouthing” cops in his lyrics.

The story implies he glamourises “ghetto life, a world of guns, dope and despair” and sees a Sergeants Benevolent Association official urge: “As a New York City firefighter, he should be trying to bring people together rather than fracture relationships, especially in communities of color.” 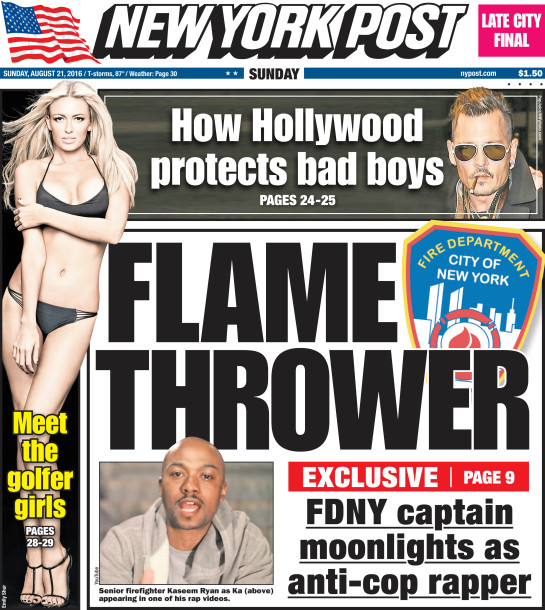 It is common knowledge that Ryan, who we interviewed back in 2013, is a veteran firefighter working in the Bedford-Stuyvesant area.

“I had no idea he was doing that on the side,” one fellow firefighter is quoted as telling the Post. “He’s really not a bad guy. But he shouldn’t be bad-mouthing cops.”

Many members of the music community, and beyond, have been left feeling frustrated and upset by the story, while showing solidarity with Ka. See a selection of the responses below.

welp ill never give another interview to the New York post again. after how they did KA I can't imagine any rapper talking to them again.

KA should be celebrated as a New York treasure. an fdny captain who moonlights as a purveyor of vivid, gritty, eloquent music. that's NY.

"discovering" KA works for the fire department should have actually been the feel good story of the year if not written by right wing hacks.

perhaps if a rapper spends his days saving people from death by fire you should assume his character is strong and maybe even listen to him.

Shame on the New York Post. I'm heartbroken for @BrownsvilleKa and infuriated with myself.

This is disgusting reporting.

@BrownsvilleKa respect from a fellow fdny member who refuses to be silent about the injustices of the justice system. #thisaintbackintheday

Salute to @BrownsvilleKa for who he is, contradictions and all. Article is clearly a hit job. His crime is 1 of holding a common BK opinion.

Ryan has yet to comment directly on the story, although his website bio declares that “his songs are not for everyone.” “They’re not for the radio, the club or the masses. My music is for those who miss early ‘90s hip hop when pain and struggle were the dominant themes.”

Ka has just released is fourth solo LP, Honor Killed the Samurai, the follow-up to The Night’s Gambit in 2013.

“Ka creates beautifully written fiction giving us wonderful and tragic looks into mystery and the underworld. I think [the article writer] Susan [Edelman] does understand this and think she knew that when she used these wonderfully poetic Songs that a NYD Fire Capt writes in his spare time when not saving lives to shame him.” More below.

So Susan- who is a writer- doesn't seem to get that like a Walter Mosley novel, Ka creates beautifully written fiction giving us wonderful and tragic looks into mystery and the underworld. I think Susan does understand this and think she knew that when she used these wonderfully poetic Songs that a NYD Fire Capt writes in his spare time when not saving lives to shame him. He cud easily have a record deal and be a legend with a cult following like MF Doom but, instead he like Charles Bukowski lives and works with regular people while also being a writing genius. I know Susan sees this and ignores it too, although using eloquent language and subtleties to call Ka an "Ungrateful Nigger". A shame too, considering she is a woman. I feel Susan should be an ally considering sexism and racism are supported by the same systems. She should know what being so angry you want to explode feels like and having to confess that in journal only. This man is a hero every day. As a fierce defender of Good cops, I have to say Firemen and Teachers deserve the same and more considerations. A firefighter knows each day brings death as a possible outcome but when it comes they must run to it to save others just like a cop. They have to be fit- mind, spirit and body and all they get is burns, burn out and like cops and teachers are under paid as well. Like Teachers they aren't really mentioned until it's extreme or it's an issue with pay. I salutes Capt Kaseem Ryan for being a real life Super hero who saves our lives by day and Gives us words to comfort our pain and anger at night. Susan is slime for what she wrote and inferred but she has to live with that. From the world of rap & the real world Thank U Capt. Reed aka Ka! 🙏🏾💯. #RealLifeComicBookHero #ThisIsAnAttemptedLynching #SusanWasSayingNiggerStayInYourPlace #IfWeLoveCopsWhyNotPayBetter #WeShudLoveCopsTeachersAndFDTheSame #AllAreHeros #peace!