Spencer Clark has built one of the most singular catalogs in experimental music as both a solo artist and one half of dormant noise duo The Skaters. Unlike his world-building contemporaries James Ferraro and Oneohtrix Point Never, Clark has broken completely free of our reality to create a form of exotica from another dimension. Miles Bowe follows him on his psychedelic journey to find his latest album, The World Of Shells.

The original Nightmare On Elm Street had easily the smartest solution to defeating Freddy Krueger: Nancy realizes how to defeat the bogeyman after Johnny Depp’s Glen tells her about a Balinese shamanic practice he calls “dream skills”.

“You say, okay, I’m gonna make up my mind that I fall into a magic world where I can get something special, like a poem or song. They get all their art and literature from dreams – just wake up and write it down,” he says, summarizing the essence of horror. “Dream skills.”

Like many children of the 1980s, Spencer Clark was haunted by Freddy Krueger in his dreams, but the singular space he’s carved out artistically suggests he’s lived by Glen’s advice ever since. Clark came to prominence in the LA noise scene with Skaters, his brain-melting noise project with James Ferraro, but in the years since he’s methodically developed a musical language for one. “Dream skills” isn’t a bad way to describe it, actually, but “dream symphonies” feels more in tune with his ambitions, waking or otherwise. While his albums bear the distinct palette of the E-Max II — a massive ‘90s sampling keyboard — what he composes (and the samples he creates to do so) are as unpredictable and mysterious as the dreams he mines for meaning.

“To find inspiration or to learn about yourself, you need to have a conversation with that sleeping person. There’s a give and take — if a dream suggests something, it’s cool to follow the suggestion in waking life,” Clark explains to me over Skype from his home in Antwerp, not long after waking up. He’s foggy and sharp all at once. “It’s somehow saying you want it to keep happening. It’s like a friendship, your other person. I don’t think everyone has to do it, but if it’s there, it’s fun to involve yourself with it.” 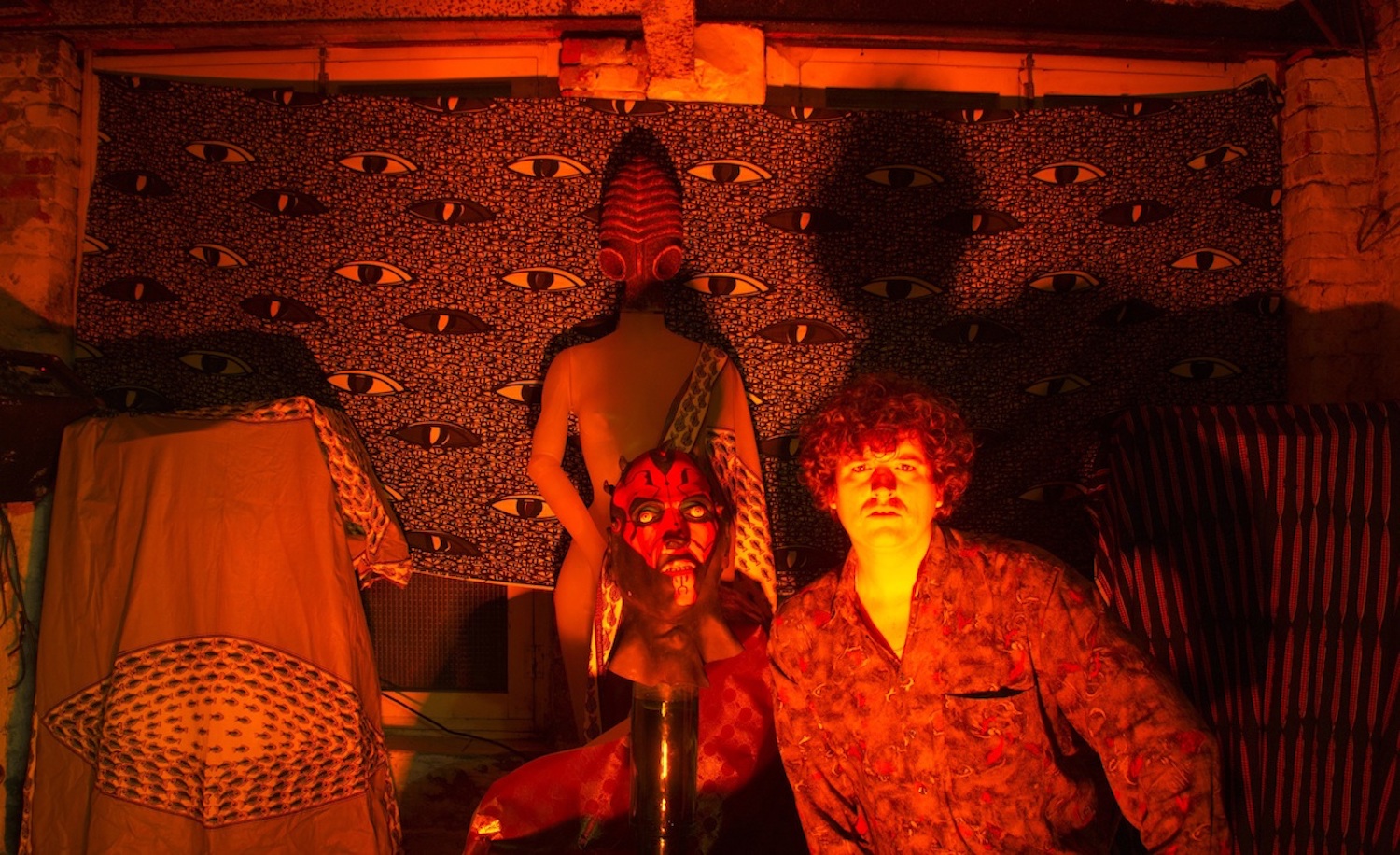 An engagement with his subconscious has led Clark to create some of the most awe-inspiring psychedelic music in recent memory. His last release began life as a recurring nightmare about Hellraiser II before he was led on a globe-trotting journey involving pagan rituals and a visit to HR Giger’s castle. Ultimately, he couldn’t contain it to a single release, capturing alternate perspectives of the same vision with 2014’s Pinhead In Fantasia and HR Giger’s Studiolo — five hours of music that sound like nothing from this planet.

While his contemporaries in similar “world-building” music like James Ferraro and Oneohtrix Point Never often attempt to refract something of our own world, Clark’s music feels like exotica by way of H.P. Lovecraft, building mythologies and painting places that feel removed from any reference point. Deep listening can offer glimpses into an impossible realm – and now we enter The World Of Shells, the culmination of a journey both physical and psychic, travelling from California to Australia to Sicily and drawing on everything from alien reptile conspiracy theories to Renaissance sculpture, rock formations and the films of Peter Weir.

The World of Shells, released under the name Typhonian Highlife, was triggered by an intense dream. It occurred in California in early 2015 while he was waiting to travel to Australia, not long after his wedding and the International Mystery Fest, a one-day experimental showcase organized with his friend Matt Mondanile, aka Ducktails.

“There was this wizard being and this mask,” he begins, “and he was pointing at the mask, showing me, and making plasma, then the mask’s face would start to move. It was really intense to see someone put energy on something and make it move.”

It’s a surreal image, and Clark immediately began searching for clues. He’s done this before. The dream, he thinks, was likely inspired by Joscelyn Godwin’s book Pagan Dream Of The Renaissance, and a passage in particular that observed how Renaissance sculpture attempted to create the illusion of motion in its figures. The next move was obvious to him: find a mask.

“I see it as a conversation that I decided to have at some point and I’ll keep having, and it should make my life more full”

With help from his wife Amy, also known as visual artist A.R. Faust, and old Skaters partner Ferraro, Clark eventually found the demon mask he needed in a shop in Hollywood – just an old mask of Star Wars’ Darth Maul. It still wasn’t complete. The mask needed energy, which he provided by solely playing wind sounds on his keyboard for the first several weeks of recording.

“I felt wind was a sound that might charge it with some sort of energy like in my dream, like the plasma was wind,” he says, describing what would later become the first sounds on opener ‘Chitahoori Training Tape’. Later, they came across a crystal shop offering aura photographs, where felt compelled to have one taken wearing the mask.

“It’s super self-help style, which I’m definitely not into, but it’s really interesting the lengths people will go to invent things,” he says, dispelling some of the mystique while also hinting at richer truth to his work.

Clark had a face for his creature, but what kind of creature was it? Zulu shaman Credo Mutwa’s stories about the Chitauri, an alien reptile race that controls humanity, provided ideas for that. The political aspect of Mutwa’s writing has previously enticed conspiracy theorists like David Icke, but Clark says he admires Mutwa purely for his storytelling and his way of recreating those stories through painting and sculpture.

“The fact that he makes sculptures and paintings to back up his stories, or to fulfil his imagination, is really inspiring to me,” he says. “I think all art for me is that. People who do that, who just have fantasies and build up the world around it.”

In the opening of ‘The Startled Gaze of The Chitahoori,’ the creature is fearsome and majestic, a wonder of nature. The Chitauri may belong to Mutwa, but the Chitahoori was Clark’s own creation — and it also needed a habitat.

In order to create this natural environment, Clark employs a focused palette of sounds and recurring motifs. “In order to create that nature, there are samples that have to be fundamental,” he explains. “I worked really long on the sampling for this one so that the sounds were powerful enough to imply exactly what they are.”

If Clark’s music is about materializing his imagined worlds, The World Of Shells is one of his lushest creations yet. He takes imagery from deserts and oceans, blending the two in ways that are naturally impossible; tracks like ‘Nyangani Warp Speeds’ blend gurgling, watery synths with stark blasts which Clark thinks of a flattened rock formations: “mesas”. Two Australian landmarks – the Underwater World aquarium at Mooloolaba and Hanging Rock in Victoria – provided inspiration for the album’s aural climates.

The aquarium, with its huge underwater glass tunnels, spawned the track ‘Nano-Zootypes In A Tenctonese Exhibition Tank’. Fascinated by “fake nature” constructions, Clark ruminated on the idea of alien ships transporting fish from other planets, comparing them to the aliens from cult sci-fi-buddy-cop saga Alien Nation – a wondrous genre-clash series whose five straight-to-VHS films are all cited as sources in Shells’ liner notes.

The aquarium also led to a companion album, The Stimulated Australia, due this month on Edicoes CN, a label run by Lieven Martens Moana of Dolphins Into The Future. The B-side, ‘Study For The World Of Shells,’ is a 20-minute field recording taken at the Mooboolaba by Clark. Field recording is a rare event for him – he uses the recordings only for reference while creating original samples.

“I like to remember things without having to document them, because I think if it’s really important I’ll just remember it. But sometimes if you’re seeing so much stuff, you need something physical to remind you,” he says.

Hanging Rock, the Australian mountain made existentially terrifying by Peter Weir’s classic Picnic At Hanging Rock, provided another key stop for Shells. I had spoken to Clark previously about Weir’s films and their haunting presentation of Australia’s natural world, but the influence has never been more vivid in his music. The beautiful but menacing landmarks echoes in eerie drones on tracks like ‘Wah Wah Day Gecko Gecco’. After getting himself lost on the mountain during a trip, Clark donned the mask again for another photograph. 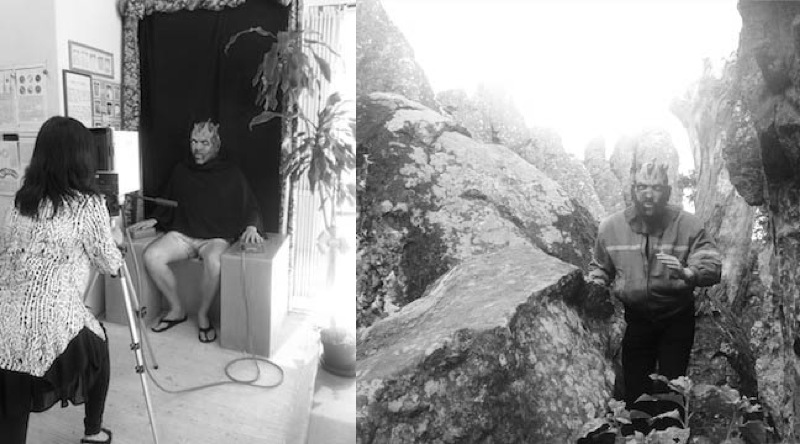 As a kind of mental cleanse, the album ends with a track outside of its world, made with the help of a collaborator. On ‘Oracle Of Egret’ he enlists vocalist Nour Mobarak to craft the album’s closing 15-minute suite. Recorded in Sicily inside another awe-inspiring location, The Ear Of Dionysus limestone cave, the track is distinct from everything before it. Rather than water and desert sounds, we drift into an underworld of eerie choral samples and synths that sweep like some alien harp. It’s one of Clark’s most detailed landscapes.

Clark didn’t begin piecing together The World Of Shells until after completing the globe-spanning journey that inspired it; the record was still a vibrant, shapeshifting thing until the moment he finished mixing it live. He describes the album as a diary, though one capturing feelings and sensory experiences rather than events. Dreams which inspire experiences which inspire the art which inspire the dreams, you could say. Like the album’s bookending sounds, it’s cyclical. It’s a conversation. It’s dream skills.

“I just see it as a conversation that I decided to have at some point and I’ll keep having, and it should make my life better — not happier, or sadder, it should just make my life more full and make me realize things. Fill in the colors,” he says. “It’s a destination.” World Of Shells again affirms Clark as one of experimental music’s great explorers. May he never stop searching.

The World Of Shells is out now on Pacific City Sound Visions; The Stimulated Australia is out on December 10 on Edições CN

Read next: The City Was Not Invited: A trip to International Mystery Fest, Spencer Clark’s LA festival