The tracklist for T2: Trainspotting has emerged online, with the CD briefly listed on Amazon as being released on January 27, the same day as the film. It has since been taken down, but a tweet from Trainspotting author Irvine Welsh appears to confirm its authenticity.

The new soundtrack features artists who appeared on the soundtrack of the original film, including Iggy Pop and Underworld, with the addition of new names like Young Fathers, Fat White Family and Wolf Alice. ‘Relax’ by Frankie Goes to Hollywood, ‘Dreaming’ by Blondie and Queen’s ‘Radio Ga Ga’ also make an appearance.

It includes a remix of Iggy Pop’s ‘Lust For Life’ by The Prodigy, while Underworld return with a song called ‘Slow Slippy’, which is presumably a new take on their classic ‘Born Slippy’  – one of the original film’s flagship tunes. See a screenshot of the full tracklist via Mixmag below. 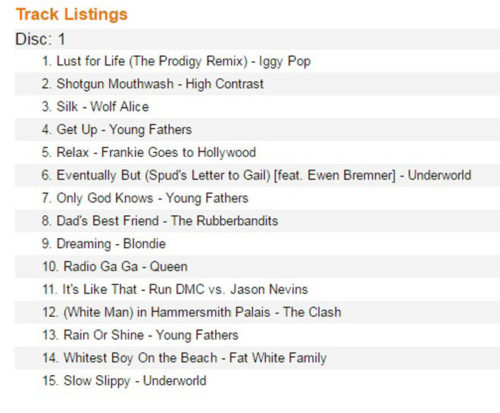 Watch the trailer for T2: Trainspotting below.