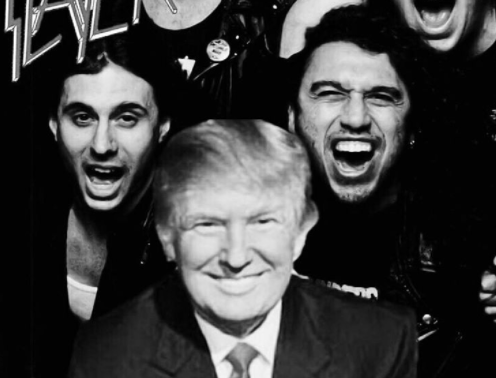 Slayer frontman Tom Araya has called America “a nation of crybabies” following the negative reaction to an Instagram post he shared in January that featured the band with a Photoshopped image of Donald Trump.

Araya had kicked up a shitstorm for mocking fans for their dislike of the post, describing Trump’s critics as “snowflakes”, while adding: “Like him or not he is the president.”

Slayer later distanced themselves from the image, stating: “it’s not something the band would have posted if asked, and does not belong on a Slayer social page.”

Believe it or not this picture was posted by me Tom Araya on 1/20 cause I thought it was funny … I was amazed at the comments about the picture some positive some negative more amazing was in 2 hours there was 10,000 likes … But i never would have guessed that there where so many snowflakes commenting their distaste for the new president. Like him or not he is the president … woke up the next morning and found someone had deleted the post … can some one please explain why…?

Now in a new interview with Chilean radio station Futuro, Araya says he was “taken aback by the response” to the photo and that he “didn’t realize that [it] was gonna piss so many Slayer fans off.”

Araya doubled down on his criticism, saying: “That’s what America has become. It’s become a bunch of people that, because they didn’t get their way, they’re mad. I shared a picture that I thought was funny. They can’t even joke. They can’t even laugh at themselves. They can’t even have fun. And that just is amazing that it’s come to that. We’re a nation of crybabies.”

He also revealed how he ended up with the photo, explaining that it was sent to his wife initially. “She showed it to me. I laughed. I thought it was funny. And I thought it was funny because of all the rhetoric that Donald Trump is getting and how everybody hates him. And I decided to post the picture.

“I knew that some people wouldn’t like it. You have to do that, though, you know what I mean? I’m in Slayer, and being in Slayer, sometimes you do stuff like that just to piss people off.”

Araya clarified that he didn’t vote for Trump (or Clinton) in the election, declaring: “Those are two people that are the furthest from what I would ever vote for.” [via Blabbermouth]