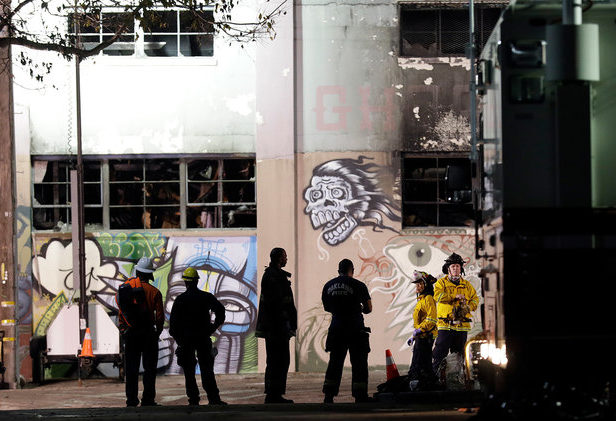 Confirmation will be given later today.

Residents of Oakland DIY space Ghost Ship have been arrested on 36 counts of manslaughter related to a deadly fire that occurred in December 2016 while they were hosting a 100% Silk showcase, reports the East Bay Times. “Master tenant” Derick Almena and his housemate and Ghost Ship creative director Max Harris were both arrested on similar charges.

The fire occurred late on December 2. Many of the party attendees were trapped in the warehouse space due to a lack of safe or accessible exits, including a stairwell leading outside that was only made of delivery palettes.

As “master tenant”, Almena was responsible for screening new roommates and delivering the rent, shared by the 50 residents at Ghost Ship, to their landlord Chor Ng who alleges he and his family was told repeatedly that no one was living there, as it is not zoned as residential space.

Alameda County District Attorney Nancy O’Malley will hold a press conference at 1pm PST to announce the charges. We will update when we have more information.[via SPIN]

He and Max Harris have been charged with 36 counts of involuntary manslaughter, according to a reporter from the San Francisco Chronicle.

DA inspector said that Almena and Harris lied to police in the past, claiming that no one lived in the Ghost Ship warehouse, per court docs