PBMIX-3 review: The pocket mixer Korg should have made years ago

The latest device from the team behind the Patchblocks mini-synths is a battery-powered mixer you can fit in your pocket. Scott Wilson finds out if the sound and experience of using PBMIX-3 lives up to the convenience.

Synths are so small nowadays that it’s possible to assemble a workable live rig out of gear that can fit in a small backpack. However, if you want a tiny mixer to plug all that compact gear into, the options are far less numerous. Korg Volca owners have been crying out for a battery-powered Volca Mixer to match their synths for years, but it’s the team behind another set of pocket synths that’s beaten the Japanese company to it with a rechargeable mixer that’s designed for all the compact gizmos in your studio.

The PBMIX-3 is the latest addition to Mindflood’s Patchblocks family, a range of snap-together synth modules that can be reprogrammed with your own sounds and effects. Unlike its siblings though, the PBMIX-3 isn’t reprogrammable – it’s just a very simple three-channel mixer (four if you count the auxiliary send and return channel) with volume level knobs and two outputs. In fact, it’s only tangentially connected to the other Patchblocks, with the company positioning it as a companion for any synth gear.

The PBMIX-3 isn’t the only tiny mixer on the market. Bastl Instruments recently released the AA-powered Dude, and small-format mixers have been available for years, but the PBMIX-3’s power supply is what stands out. Rather than having to plug in the mixer, it’s powered from a built-in, rechargeable battery. This lasts a whopping eight hours, with just two hours needed to charge it. Even better, it charges using an included USB-C cable, meaning you can plug it into a wall adapter or just your laptop. It’s a joy to use, and other companies should consider adopting the idea for their own battery-powered synths.

Of course, as a battery-powered mixer, it plays best with other battery-operated instruments – that is, small devices with minijack outputs. The set of braided minijack cables that can be purchased alongside the mixer work fine with Volcas, Bastl Instruments gear or even Roland Boutique modules, but something like Elektron’s Digitakt – which is highly portable – will need a slightly atypical cable to use. It’s not crucial, but something to consider if most of your gear uses the larger 1/4” jack outputs. 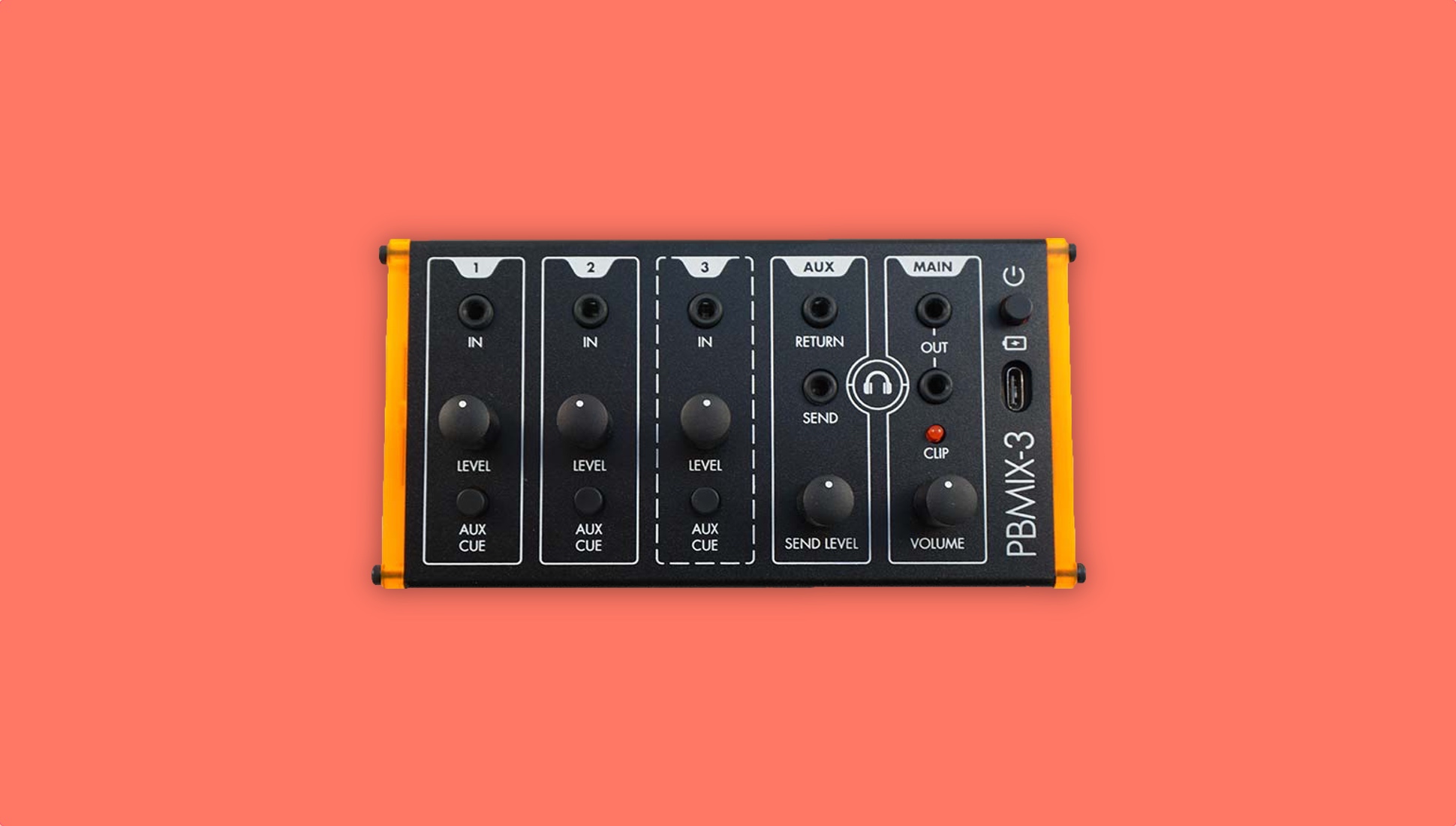 “If you want to noodle with a few bits of gear, the PBMIX-3 is the perfect mixer”

However, the PBMIX-3’s sound quality is very good for a mixer of this size and price. The device is RF shielded, which prevents any unwanted noise interference from devices such as radios and mobile phones. I had expected a degree of background hiss, but for the most part there was none to be heard, except when the volume was cranked up very high. The quality is considerably better than the mixer supplied with Mindflood’s other recent product, Minijam Studio, which is very lo-fi.

The build quality is also great. The aluminum enclosure feels solid enough to withstand any knocks or falls it might incur, and the aluminum knobs, usually the weakest point of any affordable gear, are exceptionally nice to use, and, most importantly, not too loose. Whether you’ll like the light-up LEDs on the side will be down to personal preference, but they definitely help to add some illumination in darker studios.

The mixer section might appear limited by its three channels, but it’s more versatile than it looks. The aux channel has a send and return, which you can plug a simple effect unit (or a chain) into. It won’t let you effect a single channel, but if you just want to add a bit of reverb or overdrive to all the channels, it’s ideal. The aux send can also be used to cue channels in your headphones, allowing you to use it as a very simple DJ mixer. It really adds to what would otherwise be a very simple mixer, and gives it the edge over Bastl’s Dude.

However, at £129 it’s quite expensive; it’s possible to get a five-channel mains-powered mixer with a similar footprint for under £50 – though obviously, you won’t have the convenience of battery power. It’s also considerably more expensive than Bastl’s Dude, which costs just €75 and has five channels, all with mute buttons – though the inputs are mono. Ultimately, mixers in this category must compromise somewhere, and in the case of the PBMIX-3 that compromise is a higher price and a channel or two less than most people will want.

Like most functional mixers, the PBMIX-3 probably isn’t going to inspire the kind of gear lust as most hardware synths. However, it does what it sets out to do very well. The appeal of the current wave of portable gear is that you can get out of the studio and make music anywhere, be that outdoors or just into another room, and this mixer offers something that will let you set up a drum machine and two synths at the dining table with the minimum of fuss. If you want to noodle with a few bits of gear, the PBMIX-3 is the perfect mixer.