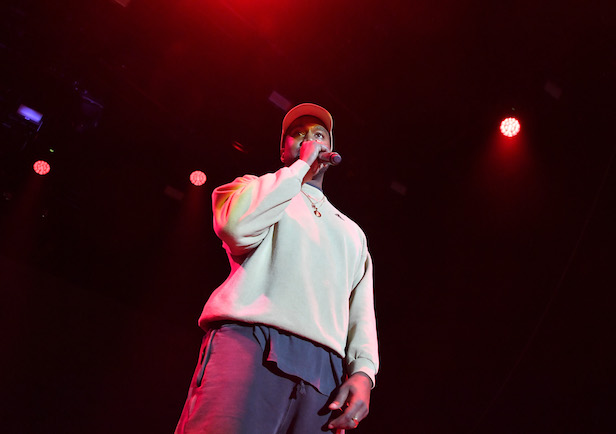 Kanye West has unveiled a new track with T.I. that tackles his recent show of support for Donald Trump.

‘Ye vs. the People’, which premiered on Power 106 on Friday (April 27), sees T.I. assume the role of “the people” who have criticized West’s recent pro-Trump tweets, while the Life of Pablo rapper goes in on subjects including Trump, Obama and police brutality.

The track opens with Kanye rapping the lyric, “I know Obama was heaven-sent / But ever since Trump won, it proved that I could be president.” He also addresses his signed “Make America Great Again” cap, which he stepped out in last week. “I took it, wore it, rocked it, gave it a new direction / Added empathy, care, love and affection / And y’all simply questioning my methods.”

T.I. questions West’s alleged political allegiances, “fuck what you choose as your political party
You representin’ dudes who seem crude and cold-hearted,” while wondering whether his friend is in “the sunken place.”

Check out the full lyrics on Genius and stream ‘Ye vs. the People’ via Spotify below. Following the release of the trolly ‘Lift Yourself’ last week, this is Kanye West’s first new music since 2016’s The Life of Pablo. The US star has a solo new album coming on June 1 and a collaborative record with Kid Cudi coming out on the following week.

Read next: Kanye West’s The Life Of Pablo: Exploring the songs behind its samples