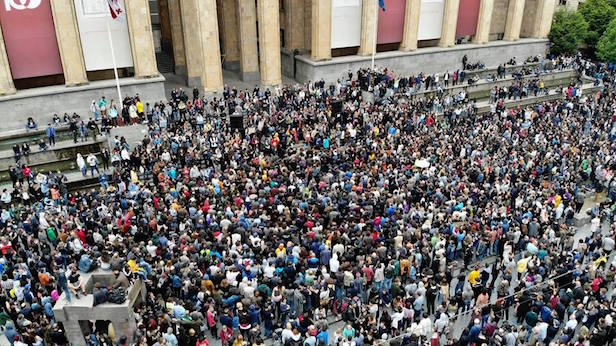 Protestors have gathered in Tbilisi, Georgia following armed police raids of nightclubs Bassiani and Café Gallery earlier this morning (May 12).

According to RA, special forces entered the clubs as part of the government’s response to five drug-related deaths in the past two weeks, which the authorities claim are connected to Bassiani. However, a statement from Bassiani on Monday claimed that “none of the tragic deaths have occurred on the territory of the club.”

The statement emphasized that the club has “never engaged in any illicit drug trade and each club-goer is thoroughly searched before entering the club.” It criticized Georgia’s current zero-tolerance drug policy, which it claims is “not only incapable of solving the issues… it is many times the very cause of the tragedy.”

A new statement from Bassiani alleges that “approximately 60 people were arrested” this morning, including the club’s co-founders, Tato Getia and Zviad Gelbakhiani and that the police “beat up peaceful demonstrators.” The statement also claims that “there is no doubt that the state is waging a war against the only sphere of the culture of the independent Georgia.”

People have taken to the streets to protest the police raids and to demand resignation of Georgian prime minister Giorgi Kvirikashvili and minister of internal affairs Giorgi Gakharia. Check out some footage via social media below.

'This country belongs to us' – people shout at the demonstration in #tbilisi #bassiani pic.twitter.com/wax51ED8J3