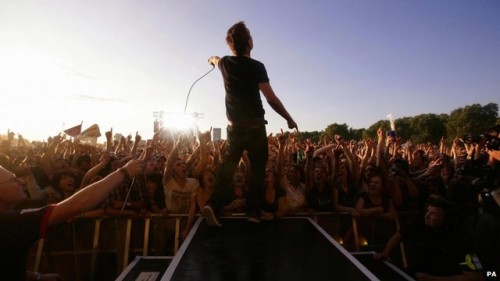 For the last fortnight, the press has been wild with speculation that this weekend’s Blur concert was the Britpop band’s last.

Not part of the Olympics closing ceremony, the gig (which also featured The Specials and New Order) was nonetheless an Olympic event, taking place at Hyde Park at the same time as the closing ceremony. At this point we’ve heard varying things from different members of Blur as regards the group’s future, but releasing this concert as a live album would surely add fuel to the flames.

Consider them fueled, then: Parklive is available to buy on iTunes now, will be available to order as a triple-CD set from Blur’s website next week (two CDs comprise the live show; the third is a bonus disc of unreleased live tracks from recent warm up shows),  and finally will be released as a deluxe 5-CD/DVD package in November, featuring a DVD film of the concert, a CD of tracks recorded at London’s 100 Club, and a hardback photo book. Seems excessive if it’s Just Another Gig, right?