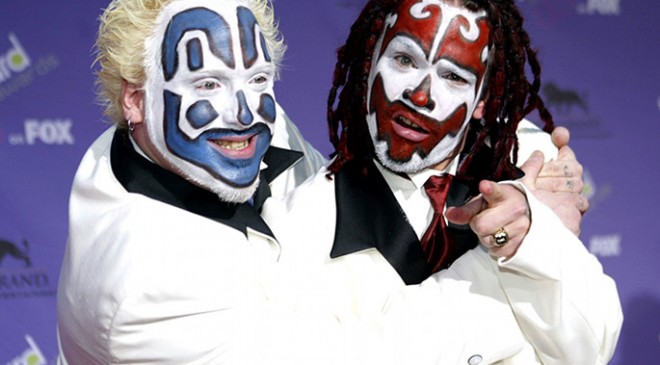 Horrorcore elders (and Danny Brown bezzies) Insane Clown Posse are being taken to court on sexual harassment charges by a former employee.

Andrea Pellegrini – former attorney and publicist with the pair’s Psychopathic Records label – claims that the band subjected her and others to salacious treatment on a number of occasions. The 32-year old’s suit states that she was gifted a “large sex toy” by the pair following a break-up, and was regularly labelled a “bitch” at work. According to her testimony, Psychopathic Records staffer Dan Diamond also bought “vagina tighteners” for members of the team, amongst other transgressions.

The suit also sees Pellegrini allege that she was forced to “act unethically [and] illegally” by the duo, most notably when asked to illegally source automatic weapons for a label photoshoot. Pelligini was dismissed by Psychopathic Records in November 2012 – something she claims was a direct result of her reporting her concerns to her bosses.

A long list, but Pellegrini’s case seems pretty diminutive compared to ICP’s recent legal battles: in 2012, the pair took the FBI to court after their feverishly loyal fanbase of Juggalos were officially classed as a “gang”. [via NME]