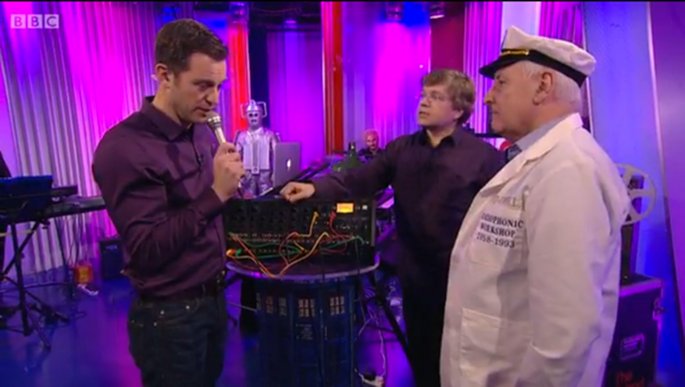 In probably the strangest television booking of the year, cosy BBC One magazine programme The One Show has played host to the BBC Radiophonic Workshop.

The BBC’s pioneering innovative electronic sound production unit, best known for their works for television in the 1960s, have long passed into legend: as well as being heroes to synth enthusiasts and sound designers – see Rephlex’s landmark 2003 compilation for evidence – their best known compositions (Doctor Who, Quartermass and Blake’s 7 among them) have made a sizeable mark on the British cultural consciousness.

Earlier this year, unapologetically wacky children’s presenters – typically known for their none-too-endearing “Bogies!” catchprase – cheered us all by presenting a great full-length documentary for kids about Workshop pioneer Delia Derbyshire. The Workshop had some more unlikely exposure last night, performing live on The One Show to mark Doctor Who’s impending 50th anniversary.

Original member Dick Mills, dressed in weirdly nautical Radiophonic Workshop garb, talked through him and Derbyshire producing the iconic soundtrack. They also talk host Matt Baker through some analogue synthesiser kit, discuss their live reformation, and, best of all, perform the theme tune flanked by a dancing Cyberman. It’s probably the weirdest thing to happen on tea-time television since, well, Morrissey turned up to squirm on the One Show sofa. Head here to watch; skip to the 52-minute mark to catch the team in action.

Having reconvened with a clutch of first-wave members for a few live shows, they’ve been up to all sorts in the last few months. Two key releases, 1971’s BBC Radiophonic Music and 1975’s The BBC Radiophonic Workshop, will also get the reissue treatment later this month, and crucial members Dick Mills and Paddy Kingsland were recruited on remix duty by new imprint Sound of the Cosmos.