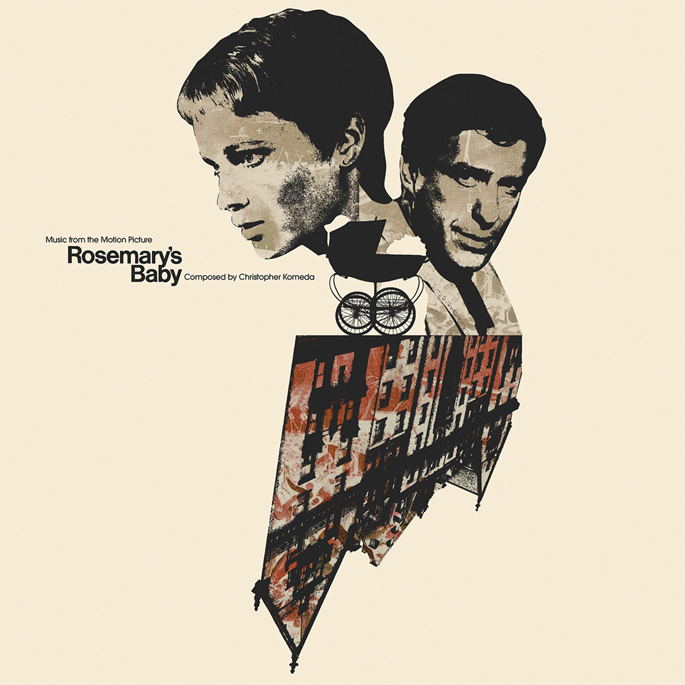 Christopher Komeda’s chilling score finally gets the reissue it deserves.

Fledgling imprint Waxwork Records have had a cracking 2013; already we’ve been treated to deluxe reissues of Richard Band‘s excellent Re-Animator OST and the soundtrack to George Romero’s zombie classic Day of the Dead, and it looks as if the label are moving into 2014 with a similar resolve.

Remastered from the original tapes, Waxwork’s reissue of Christopher Komeda’s accompaniment to Roman Polanski’s Rosemary’s Baby looks to be a decidedly deluxe affair. Coming with extensive liner notes, production stills and some fantastic new art from Jay Shaw (which you can see above), this is the first time the complete soundtrack has been available on vinyl.

It’s not just any old vinyl either, the regular version will be on 180g clear vinyl, and there are two (!) limited edition variants. The first will be an edition of 500 and on black and crystal clear haze vinyl, but the second is really exciting (if a little confusing). Apparently “the first of its kind,” the record is a 200g hybrid baby blue/blood red vinyl and the label is keen to state that this is “solid,” meaning that it isn’t simply two records connected together.

Whichever edition you manage to clasp your mitts on, having the soundtrack to one of the eeriest horror films ever made is surely a very good thing indeed.

Rosemary’s Baby will be available to pre-order on December 10 via Waxwork.